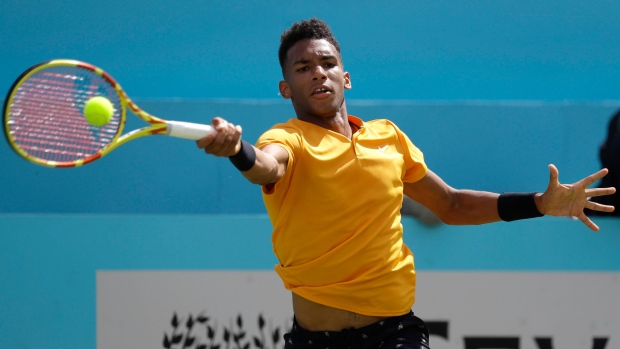 Felix Auger-Aliassime's rise has been both meteoric and deliberate. Step-by-step, he's putting the pieces in place. ​​

Five years ago, Auger-Aliassime became the first 14-year-old to qualify for an event on the ATP Challenger Tour and made history as the youngest player to ever earn an ATP ranking point.

His latest step forward wasn't as historic, but it was still significant. The kid from Montreal took his talents indoors in February making back-to-back finals in Rotterdam and Marseille. Prior to this season, Auger-Aliassime was just 3-6 under a roof on the ATP circuit.

"It was the first time he played at this level in indoor matches," said co-coach Frederic Fontang in a phone interview from France. "He had some really good results in 2019, but on hard courts and outside on clay and grass, but was missing the indoor performance."

"Indoors is not necessarily his best surface, so what he did is very, very encouraging," said co-coach Guillaume Marx in a phone interview from Montreal.

Auger-Aliassime is No. 20 in the rankings despite being just 19-years-old and he was gaini​ng momentum when the COVID-19 pandemic brought the tennis tour to a screeching halt.

The youngest finalist in @abnamrowtt history.

In Rotterdam, a 500-level event, Auger-Aliassime defeated Jan-Lennard Struff, Grigor Dimitrov, Aljaz Bedene and Pablo Carreno Busta before falling to an inspired Gael Monfils. The 7-6 (2), 6-4 semifinal win against the then 30th-ranked Carreno Busta was listed by Fontang and Marx as Auger-Aliassime's best match of the season.

"He was very, very solid," said Marx. "I think (Felix) won something like 18 points in a row on his serve. He was very accurate there."

The 28-year-old Spaniard is usually a tough out, but Auger-Aliassime simply wouldn't let him grab a foothold in the match.

"He was able to maintain some long rallies," noted Fontang. "Carreno Busta is one of the best players in defence. Felix was very sharp on the first shots, serve plus one, return plus one, so the first four shots were really strong, but he was also able to maintain long rallies. The next step is for him to do that against a player like Monfils or Novak Djokovic, who are the top players in defence."

The focus for Team Auger-Aliassime is getting their prodigy to become a bit more steady. Marx describes the start of the season as a "rollercoaster" with Auger-Aliassime stumbling at the ATP Cup, bouncing back with a semifinal run in Adelaide before bowing out in the first round at the Australian Open against Ernests Gulbis.

"It's about being aggressive, but also being more consistent," Marx explained, "not playing a different game, but being more consistent. That's where we want to go. The tactics are clear. He's an offensive player and will be making more mistakes than others, but at some points he knows he has to limit those errors and that's the direction we're giving. We don't want to take away any of the aggressiveness he has, but we want to find a little more consistency."

With the season paused, Fontang and Marx are linking up with Auger-Aliassime once a week to watch a match from this season. The last one they went through was the Tsitsipas loss. ​

"We're letting the match play like it was a live match," Marx said. "Sometimes we focus more on Felix, sometimes we focus more on a specific opponent. When we watched the final of Marseille we took more of the angle of Tsitsipas. It was a decent match from Felix, but we found Stefanos showed a very good physical presence in the final that made him cover the court well and play (the ball) deep regularly. It was important for us to understand what he was doing better."

The loss to Tsitsipas​ dropped Auger-Aliassime to 0-5 in tour-level championship matches so his next breakthrough may be earning a title.

"The first one is important, of course, but I have no worries about that, because he will do it," said Fontang. "We have to see the other side of the coin. He's already made so many finals at his age so this is very positive and it's just a question of time and maybe he'll do it in a big one."

"The first final that he played last year in Rio is one where he didn't play well," said Marx, "but otherwise I don't feel he played bad in those finals. I think he played better players, very good players. So, we don't feel like there's too much to overthink. He just needs to keep improving and getting more chances. He's obviously going to get there."

Fontang suggests Auger-Aliassime may have worn down a bit against Tsitsipas​ considering it was his 10th match in two weeks. Despite standing 6-foot-4, 194 pounds, Auger-Aliassime is still quite young. He's the only teenager in the top 70.

And fitness is the focus right now. A plan has been crafted for Auger-Aliassime to stay in shape during this unprecedented, extended break in the schedule. Marx notes that Auger-Aliassime can do different things, like lift heavier weights, because he won't be playing competitively for a while. The tour has cancelled all events through mid-July.

Auger-Aliassime has also created a makeshift area to hit the ball against a wall.

"He finished his quarantine (after returning from Indian Wells, California) at the end of last week so now he can do a little more," noted Fontang, "but not as much as we would like. He can also touch the ball as you saw in his Twitter video and we tried to organize everything so he can keep up on the fitness side."

Whichever players handle the break best will hit the ground running whenever the tour returns. Auger-Aliassime may be young in age, but has always been mature beyond his years. He is focused on what he needs to do to improve while also keeping an eye on the big picture. It's easier to handle pressure when you also maintain perspective.

This season Auger-Aliassime joined forces with BNP Paribas and CARE, an NGO fighting poverty by empowering girls and women, to launch #FAAPointsForChange. For each point he wins this season, Auger-Aliassime will donate $5 to the EduChange programme, which works to help educate young people in Togo where his father (Sam) was born. BNP Paribas will donate $15 for every point won.

"It's a very positive impact on him," said Fontang. "He's a good person. His family has great values so for him it's so natural. It's something he's wanted to do for a long time. With his dad's story, it's very natural."

For every tournament he misses due to the coronavirus outbreak, Auger-Aliassime will apply the points he won at the event in 2019.

"He's very young to open up this kind of project," noted Marx, "but everything he's doing, he wants it to be meaningful and go beyond just his own person. It gives him extra motivation."

In times of crisis, solidarity is more important than ever. I am pleased to announce that the points I have earned in 2019 will be recorded under the #FAAPointsForChange project, from @BNPPARIBASOPEN to @OpenParcARA. #Wereallinthistogether