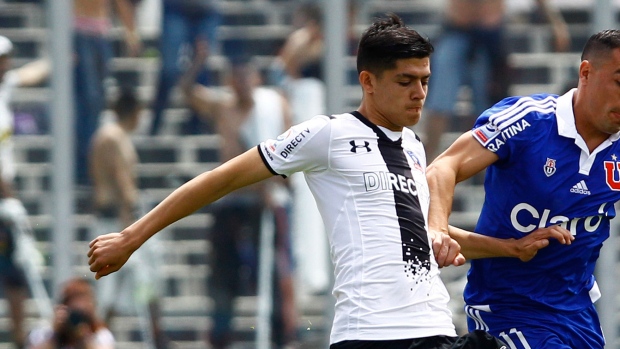 The 22-year-old who has represented Chile at the youth level and is eligible to play for Canada, has agreed to a contract through 2021, with an option for 2022 and 2023.

Gutierrez had been pondering a new contract offer from Colo-Colo but wanted a new challenge, according to Vancouver sporting director Axel Schuster.

He gives the Whitecaps some depth behind Iraqi international Ali Adnan, one of the team's designated players. The 26-year-old Adnan topped the team's payroll last season at US$1.28 million.

"There is agreement between him and us that this year he is the challenger for this position," Schuster said of Gutierrez.

"He comes in with the right expectations and that gives him time to grow," he added. "And in this business you never know what happens in one year."

Gutierrez was born in Greenfield Park, Que., and was three when his family moved to Chile. His return to Canada may give fans hope that he might switch allegiance to Canada.

The five-foot-11 defender made his professional debut with Colo-Colo in 2015. He has played five seasons in Chile's top division, including loan stints with Union Espanola in 2017, and Huachipato in 2017-18. During that time, he played in 52 league matches and made 26 appearances in the Copa Chile.

Coincidentally Thursday, Valour FC announced that Gutierrez's twin brother Diego will be returning to the CPL team next season. He joined the Winnipeg club from Chile's Palestino last March, recording one assists in 1,695 minutes in all competitions.

Diego Gutierrez grew up in Santiago and played his youth soccer with Colo-Colo and Palestino. He represented Canada at the 2017 CONCACAF Men's Under-20 Championship under Rob Gale, who now coaches Valour FC.

Valour FC also announced the return of Canadian youth international midfielder Dylan Carreiro. The 24-year-old, taken second overall in the inaugural CPL-U Sports draft, was the first Manitoban to score for the club on May 1, 2019, when he knocked in the winning goal at Pacific FC in the Winnipeg franchise's first-ever match.

Carreiro had two goals and two assists in 1,155 minutes of playing time in all competitions.