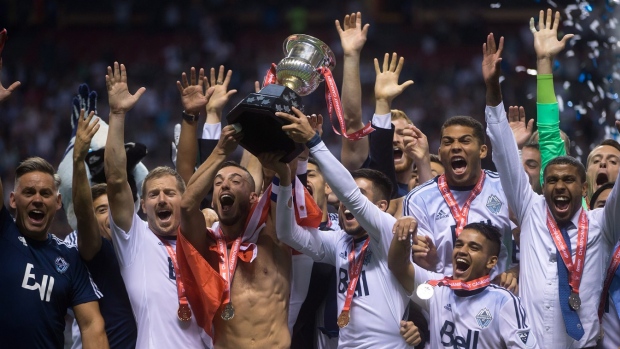 VANCOUVER - Russell Teibert yearned to play in the Wednesday night's second leg of the Amway Canadian Championships — and he did not disappoint.

The 22-year-old from Niagara Falls, Ont., who has been used mainly as a substitute lately, was named the game's most valuable player as the Vancouver Whitecaps won their first Voyageurs Cup with a 2-0 victory over the Montreal Impact. The Whitecaps had finished as runner-ups in five of the previous six Canadian championships.

"Oh, man, it's hard to put into words," said Teibert, who joined the team's residency program as a teenager in 2008. "I've been through too many heartbreaks with this tournament — disappointment for the fans, disappointment for us.

Octavio Rivero and Tim Parker scored as Vancouver took the two-game series 4-2 on aggregate. The Impact had won the Canadian championship the past two years. The two teams played to a 2-2 first-leg draw on Aug. 12 in Montreal.

Rivero opened the scoring in the 39th minute — booting the ball home a split second before Christian Techera's shot would have crossed the goal-line anyway. The goal spoiled a sensational effort by Montreal goalkeeper Eric Kronberg after he stopped Techera from point-blank range and then got back into position to stop the Whitecap speedster's second attempt.

Parker headed home a Pedro Morales corner in the 53rd minute to spoil any hope of an Impact comeback.

Teibert was part of a sturdy Vancouver midfield that prevented Montreal from mounting any serious offensive charges. The Impact failed to put a single shot on target while making nine attempts during the game. The Whitecaps put seven of their 12 shots on target.

"It's our time now and we showed that tonight," said Teibert. "There was never any question that we were going to win this game."

"I put Rusty in because this tournament means a lot to Canadian players, without a doubt, and I just sensed in training that he had a bit between his teeth," said Robinson.

Montreal was reduced to 10 players for the last 60 minutes after defender Victor Cabrera received a pair of yellow cards for fouls on Rivero.

"(The loss) is hard to swallow — it's just two different games," said Montreal coach Frank Klopas, referring to the time before and after his club was left shorthanded. "It's hard for me to understand. It's a different game after that."

Notes — The Impact were without newly acquired star striker Didier Drogba and top scorer Ignacio Piatti due to injuries. … Attendance at B.C. Place Stadium was 19,616. Only the 21,000-seat lower bowl is used for Whitecaps games. … Montreal defender Hassoun Camara, whose goal enabled the Impact to win the 2013 title in Vancouver on away goals, missed the game due to a thigh injury. … The teams return to Major League Soccer play on Saturday with the Whitecaps away at Houston and the Impact visiting Toronto FC.