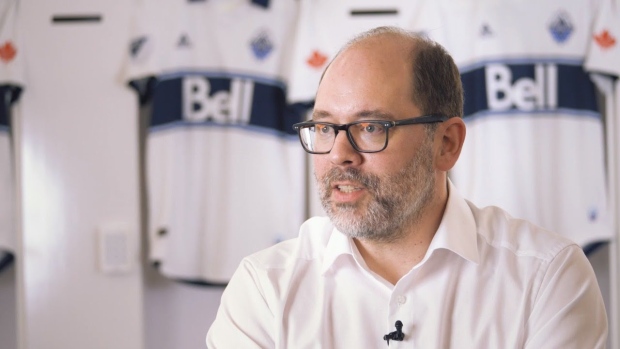 The Vancouver Whitecaps continue to deal with numerous allegations of abuse by former coaches of the club’s now-defunct women’s team.

Last Thursday, in a report by The Guardian, former player Malloree Enoch accused Hubert Busy Jr., head coach of the Whitecaps women’s team in 2010 and 2011, of attempting to solicit sex from her during a recruiting process.

Whitecaps CEO Axel Schuster released a statement last Friday, revealing that Major League Soccer will be launching an investigation into the handling of the Busby situation that will be led by independent counsel.

The statement also said that any current members of Vancouver’s executive team who were involved in the situation have been placed on administrative leave, but no names were given.

Schuster, who joined the Whitecaps in 2019, also apologized to Enoch for “letting her down” and said the organization should have done better.

Schuster spoke to TSN on Monday regarding the ongoing investigation.

TSN: You have said that you have spoken to Malloree. Can you share a bit about what those conversations with her have been like?

Schuster: I have not spoken with her to look better or to share something. But I can confirm that I have reached out to her. I don’t want to [have it] look like I have only done [so] that I now can tell all the media that I've spoken with her. I've done it with a real intention, and for that reason, I don't even like to speak too much about it.

Schuster: I have apologized to her and told her that I take that it very seriously.

TSN: Have you had any conversations with any other players, specifically those who have been outspoken regarding Bob Birarda, such as Ciara McCormack or Eden Hingwing?

Schuster: Not yet. As we have implemented the process that is completely out of our hands, a process and an investigation that is not done for us or together with – it's done against the club – so now I have to follow the rules if I really want to have a meaningful and trustful investigation in place that is different than everything else the club has done before. I have to follow the rules and part of the rules is that we are not doing anything proactively now.

TSN: In your statement, you have said that any current member of the executive team who was involved in 2011 has been placed on administrative leave. Can you say how many executives are on leave and who they are?

Schuster: This is another question where, right now, the investigation and the process that just started asked me to not share any more information for various reasons. And also, by the way, it's not said that the numbers or the names or the group of the people is the absolute final names, numbers – whatever you want to call it. It will be reviewed as part of the process to see if we have to do more action.

TSN: So, it is something that you believe will be revealed as the investigation unfolds?

Schuster: I think it will be part of the investigation to find out… You asked me, like everyone, can you tell us the number or the names? And I want to say – I cannot even say if that is the final number or final group of names. For that reason, the investigation has asked me not to speak about any more detailed information for now, for today, but that might change within the next weeks.

TSN: From the perspective of the public: do you think it is fair for the executives to remain anonymous while Malloree has had to publicly come forward with her own story?

Schuster: I think I should not have my own opinion about things. I should really support a complete independent investigation.

I was not here [before 2019]. I'm only now trying to do things differently. And I see my name, for the first time, now connected with this story as a responsible person to find out what was really going on, and then to let somebody step in who will do that, that has no connection to the club, that is doing the investigation against the club.

What I also want to say to your question is nobody says that it will be like that, at the end. We are at the beginning of a process. So, it should not be seen that that is the action the club takes. It is the action the club has taken in the first two days with the level of information we have, and had, at that point. But this investigation should be meaningful. And while this investigation is going on, we will find out what the right decisions are.

And I can say that the part that I'm feeling comfortable [with] – that I agreed to step up and to lead this process and to be the face of this process on the club side – is that, first, I was allowed to put in and implement the process that I see as integral and independent, and that I also got approval that, at the end of the process, I can take the decision that I think is right.

So, if you ask, ‘Do you think it's fair?’ I would love to answer that question after the process, because the process should lead to the right decision, and then we should find out if that's the fair one. And maybe it's the decision that you expect us to do, anyway?

TSN: With the Whitecaps now facing multiple allegations against former coaches, what needs to change within the organization?

Schuster: It's also a question that I want this investigation to find out because, right now, we are now speaking about a thing that happened 10 years ago. I'm really confident to say that the club today has other systems in place and is in another place than it was at that time. But I'm not saying that we are perfect. And I also want the investigation to find out where we are exactly and is our system good enough? And have we done the right things? Have we done good enough things? Have we done enough things?

And I already sent an email out to every player that is connected with the Whitecaps, every youth player in this country, every parent, to feel free to connect with me confidentially to give me their input about things. We have a whistleblower email and whistleblower phone number where people can reach out to a third party to bring up things anonymously.

I think that we are in a better place. But of course, it's also always the job of everyone to question – is it still the best thing, or is everyone aware of this system? Is the system working? And that's also part of what we want to find out while the process is going on.

TSN: You mentioned that you had sent an email out to all the players and parents, and everyone connected to the club. What kind of feedback have you gotten?

Schuster: I have got a lot of questions, feedback, invites to discuss. And I actually spoke with somebody today and I agreed that – we have a busy week this week with two important games, as you know – as soon as we have gone through these two games, hopefully successful, I will have time and I will fly across the country to meet all those people, to speak with them, and to get their thoughts, input and to learn from that as well.

TSN: It's been reported by The Guardian as well that several former Whitecaps and Canadian national team players will be publicly calling for the firing of executives within both the Whitecaps and Canada Soccer for anyone who may have misrepresented the departures of both Bob Birarda and Hubert Busby. What is your response to this report?

TSN: You mentioned the statements and the demands from the Canadian national team, and Canada Soccer has pledged to launch a third-party investigation involving the allegations against Bob Birarda. Have you had any conversations with anyone at Canada Soccer concerning any possible Whitecaps involvement in an investigation?

TSN: You talked about the timing of learning about the report from Malloree and the allegations. From the time that the report came out in The Guardian on Thursday morning, it was then over 24 hours later that you released the statement from the Whitecaps. What transpired over those 24 hours, and why did it take that amount of time for you to release a statement?

Schuster: Thank you for asking me the question because it’s an important one. And I apologize for everyone who was suffering for a time or waiting for a statement and got disappointed with us not having a statement.

But for me, it was important to have the right statement and to provide something that is different to everything the club has done before, because to just go out with a statement – that is not good enough. I think nobody would be happy with that. Nobody would feel now today better about that than taking a little bit more time… to think about the right process, to think about what we need really to have in place to prove and to show that we take it seriously and that we do it differently as an organization this time. And also, MLS got involved in that. So, I wanted to have the right statement, a statement that looks different than a statement that we could put out in two hours after that.

TSN: There is an investigation forthcoming, but have you spoken to any Whitecaps executives? Specifically, I'm wondering about [vice president] Dan Lenarduzzi and the email that he sent to players, and why he instructed players in 2011 to not publicly comment on the matter surrounding Hubert Busby, and that it wasn't appropriate to do so?

Schuster: As I said, since I decided to have an independent investigation in our house, investigating against us, I have respected to not do anything on my own and not to start my own investigation and to do my own research. So, for that reason, I have not done anything then to implement a real investigation that will ask all those questions.