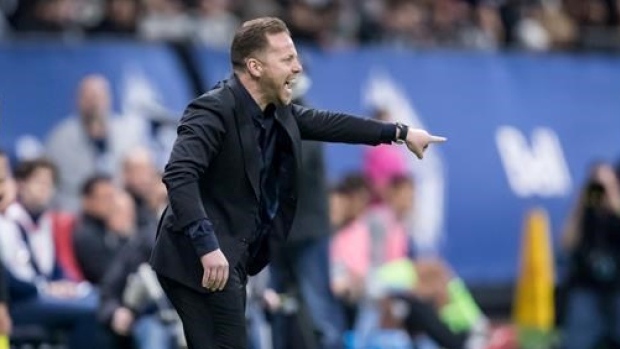 LAKE BUENA VISTA, Fla. — There have been no surprises for Whitecaps coach Marc Dos Santos so far at the MLS is Back Tournament.

"It's pretty much what I thought. Teams are not ready to play," he told a virtual news conference Monday. "So to say that teams are ready to play physically is not true.

"When your last game was almost five months ago and you didn't have a chance to play exhibition games and you go straight at it, the new pre-season I would call it was very strange ... That shows in the games.

"You see teams that are more disconnected at a certain part of the game. Players cramping, players getting injured. Tackles that are late. Coaches using pretty much all their substitutions because players get tired much faster ... And I think it's absolutely normal when you want to bring soccer as fast as possible back but you don't prepare in the right way.

Dos Santos will finally get a look at his team in action Wednesday when Vancouver takes on the San Jose Earthquakes at ESPN's Wide World of Sports complex. The Whitecaps were supposed to open last Thursday but found themselves on hold when FC Dallas, their opponent, was withdrawn from the tournament due to a rash of positive COVID-19 tests.

The Quakes, meanwhile, tied the reigning league champion Seattle Sounders 0-0 on Thursday in the opening Group B match.

Dos Santos says his players are in good spirits despite the delay in play.

"We've created our own bubble inside this (MLS) bubble and we're sticking together. We do everything together," he said. "Of course the players that didn't travel and are not with the team, that hurt us a little bit. We felt it in the dynamic of the day-to-day.

"Because we're a young team and the players that aren't with us are the most experienced voices of the team. They're the oldest guys and they brought a certain type of leadership inside the locker-room. So that is missed a little bit ... But at the same time we have to go on."

Forwards Lucas Cavallini, Fredy Montero and Tosaint Ricketts, defender Andy Rose and defender/midfielder Georges Mukumbilwa did not make the trip to the Florida tournament, which runs through Aug. 11.

Ricketts has an undisclosed medical issue whose treatment has affected his immune system while Mukumbilwa is not cleared to leave the country. Cavallini, Montero and Rose are not taking part for personal reasons.

Cavallini, a designated player, cited losing family members to COVID-19 in his decision not to play. Rose's wife is expecting a baby Friday while Montero cited the pandemic in making the "hard decision'' to stay with his wife and daughters in Canada.

Cavallini, Rickett and Rose all started while Montero came off the bench in the Whitecaps' last league game, a 1-0 win at the Los Angeles Galaxy on March 7. Vancouver opened the season with a 3-1 home loss to Sporting Kansas City.

"You adjust and adapt," midfielder Russell Teibert said of the missing talent.

The weather forecast for the 9 p.m. ET kickoff Wednesday calls for 29 C, feeling like 33 C.

Dos Santos says it's easy to lose focus given the Florida heat and humidity, "because you get tired quick."

"Sometimes you can switch off and that's why, for us, set play situations are also going to be very important."

The tie with Seattle left San Jose with a 0-1-2 regular-season record.

This report by The Canadian Press was first published July 13, 2020.