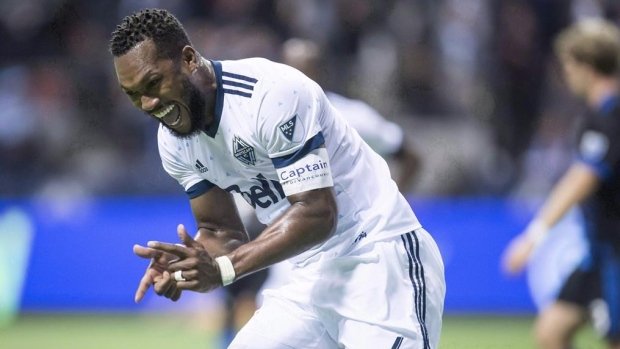 VANCOUVER — A win Saturday against Atlanta United FC gives the Vancouver Whitecaps a chance to add another item on the list of things the Major League Soccer team has never done.

The Whitecaps have never started an MLS season with three straight wins. Vancouver opened the current campaign with a home victory against the Montreal Impact then last week went on the road for their first ever win against the Dynamo in Houston.

Head coach Carl Robinson knows keeping that streak alive will be a challenge against Atlanta United (1-1-0) who won their home-opening match 3-1 over D.C. United last weekend. The crowd of 72,035 at Mercedes-Benz Stadium broke the MLS single-match attendance record Atlanta had set twice previously.

"This week is going to be very hard, we know that, against a very good team," Robinson said after a Whitecaps training session this week. "We will be organized, we will be prepared. We have to take our chances."

The game will be the Whitecaps first visit to Atlanta, but captain Kendall Waston said the team won't be intimidated by going into a loud, hostile environment.

"I think everybody enjoys playing with a full stadium," said the six-foot-five defender who had 13 clearances last week against Houston. "It's boring when only your family is cheering for you.

"When you have a lot of people screaming, and it's against you, it's even nicer."

Argentine striker Hector Villalba was named player of the match for Atlanta last week after scoring a goal and adding two assists. He's just one of the players Robinson said his team must be aware of.

"We know they are an attacking team, they are very good at it," said the former Welsh international. "Their front-four players are very good.

"We will be organized, and we will be prepared. We know there are areas in their game we believe they are weak and we can try to take advantage of them. It will be a barnstormer."

One player Vancouver won't face is midfielder Ezequiel Barco. Atlanta paid US$15 million to Independiente for his rights, but Barco suffered a quad injury prior to the season and isn't expected to return until March 31.

The Whitecaps retooled their roster over the winter, adding several new faces including striker Anthony Blondell and midfielders Felipe Martins and Jordon Mutch.

While Robinson preaches the necessity of teamwork, one of the newcomers having the most impact is striker Kei Kamara, who was acquired in a trade from New England. The 33-year-old from Sierra Leone has scored in both Whitecap games, including collecting his 100th regular-season MLS goal in his 300th match last week against Houston.

While honoured to be part of the 100-goal club, Kamara said his focus is to win an MLS title.

"That's a lot of numbers," said the 11-year MLS veteran. "That doesn't win me anything to be honest.

"As a striker you want to score a lot of goals. Me being in MLS for as long as I've been (I've seen) a lot of my friends celebrate a championship."

Kamara praised Atlanta coach Gerardo Martino for building a team that finished fourth in the Eastern Conference in their inaugural season last year while scoring 70 goals, second most in the league behind Toronto FC.

"Give a lot of credit to the head coach," said Kamara. "He put the team together, gave them a lot of freedom to really roam and score a lot of goals.

"They get a lot of goals scored on them, but they try to score more goals than the other team."

By the time the Whitecaps return from Atlanta they will already have logged over 16,800-kilometres of air miles in just two road games. The wear and tear of being on the road can take its toll, but over the last three years the Whitecaps have proven they travel well. Vancouver's 18 road wins since 2015 is more than any other MLS team.

Robinson said there of many theories about why some teams perform better than others away from home.

"Luck, if you ask some people," he said. "Determination, the will and desire to never give up.

"You need a little bit of luck along the way, but you can't get lucky for three years."

The Whitecaps started both the 2012 and 2013 seasons with back-to-back wins. In 2013 Vancouver lost its third game to Houston. In 2012, the Whitecaps opened with two wins, drew their next three games, then lost to Sporting Kansas City before beating Dallas.

Robinson said any point is important in the Western Conference.

"It's important you get points on the board whenever you can."