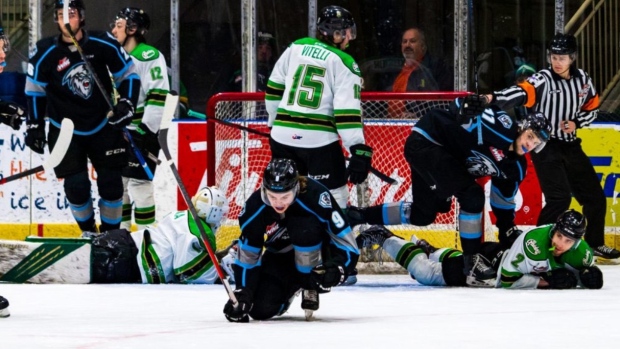 PRINCE ALBERT, Sask. — Mikey Milne had a hat trick and added an assist to lead the Winnipeg Ice to a 10-1 rout of the Prince Albert Raiders on Tuesday in Western Hockey League playoff action.

Daniel Hauser made 18 saves for the win in net.

Harrison Lodewyk was the lone scorer for Prince Albert.

Tikhon Chaika started in net for the Raiders, stopping 17-of-22 shots in 30:50 of work. Max Hildebrand turned aside 9-of-14 shots in relief.

The Ice were 3 for 5 on the power play and Prince Albert could not score on its three man advantages.

Elsewhere in the WHL, the Red Deer Rebels downed the Brandon Wheat Kings 3-1 to take a 2-1 lead in their best-of-seven series. The Edmonton Oil Kings took a 3-0 lead in their series with the Lethbridge Hurricanes after a 4-1 win on Tuesday. The Moose Jaw Warriors edged the Saskatoon Blades 3-2 in overtime to take a 3-0 lead in their series. The Portland Winterhawks blanked the Prince George Cougars 2-0 for a 3-0 series lead. The Seattle Thunderbirds topped the Kelowna Rockets 5-1 to improve to a 2-0 series lead.

This report by The Canadian Press was first published April 26, 2022.