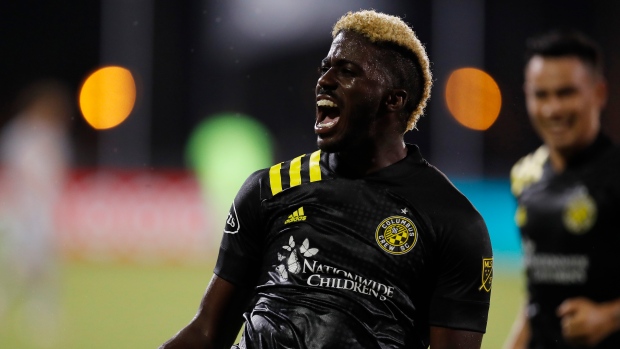 As the 2020 Major League Soccer season enters its final stages, Toronto  FC talisman Alejandro Pozuelo has emerged as the leading candidate for the league's Landon Donovan Most Valuable Player award. Leading the league in assists with 11 and fourth in MLS in goals with eight, Pozuelo has been involved with a league-high 60 per cent of TFC's goal-scoring plays this season. The Spaniard appears to be on course to win the team's second MVP award, following in the footsteps of Sebastian Giovinco, who claimed the honour in 2015.

Even if Pozuelo is the favourite, it doesn't necessarily mean he'll take home the hardware when subjective voting comes into play. While his season has been exceptional, he's far from the only player to have starred this term. So if Pozuelo doesn't come out with the crown, then who will?

Jordan Morris, Seattle Sounders -  Since yet another TFC vs. Seattle clash in the MLS Cup Final looks to be very much still in the cards, why not a battle between the top clubs for the league's top individual award? The USMNT forward is a big reason why the Sounders sit atop the Western Conference with eight goals and seven assists on the year, putting the 25-year-old local boy in the top five in both categories. Though Morris's season has been exceptional, what's going against his candidacy for the award is that he might not be the most valuable player to his own team's success. Uruguay international Nico Lodeiro is the straw that stirs the drink for the Sounders and while he might be more unheralded than Morris when it comes to league-wide plaudits, it's hard to argue that his performances aren't just as critical to the Sounders' fortunes in 2020.

Chris Mueller, Orlando City - If nothing else comes from Chris Mueller's season, he's at the very least now in the mind of USMNT head coach Gregg Berhalter and in line for his first call-up. The Lions are headed to the playoffs for the first time in their six-year history and Mueller is a big reason why. The 24-year-old Wisconsin product has eight goals and six assists this season and is an integral part to the engine that runs the Orlando City offence alongside Nani and Mauricio Pereyra. But like with Morris, the knock against Mueller is that those around him might be just as valuable and that could be a hurdle that his candidacy for MVP just can't get past.

Diego Rossi, Los Angeles FC - Though an unused substitute, Rossi found himself called up to the Uruguay senior team for the first time this month for CONMEBOL qualifiers (that should seemingly put to rest where his international future lies with Armenia having also been interested in his services as he would qualify to represent them through his mother) and why wouldn't he have? The 22-year-old Rossi leads the league with 12 goals and could become LAFC's second straight Golden Boot winner after 2019 MLS MVP Carlos Vela won it last year. Rossi has already claimed some hardware this season, grabbing the Best Young Player Award at the MLS Is Back Tournament. As LAFC makes a surge towards the top of the Western Conference following a midseason swoon, Rossi could find himself in the conversation, but there might be just too many names ahead of him in the queue.

Gyasi Zardes, Columbus Crew - An All-Star in 2015, the Los Angeles native is no stranger to MLS trophies, having won the MLS Cup in 2015 with the Galaxy and was named the 2018 Comeback Player of the Year. This season, Zardes finds himself spearheading the attack for a resurgent Crew side that is back in the playoffs following a 20th-place finish last year in the league. Zardes sits one goal behind Rossi in the race for the Golden Boot with 11 and his four assists as three behind Pedro Santos for the team lead. What could be held against the USMNT player, though, is team form. While the Crew have rebounded from last season's dreadful campaign, they're no longer atop the Eastern Conference like they were for most of the season, now trailing both TFC and the Philadelphia Union. If there are players on better teams with similar or superior numbers, it will be hard for Zardes to pip them for MVP.