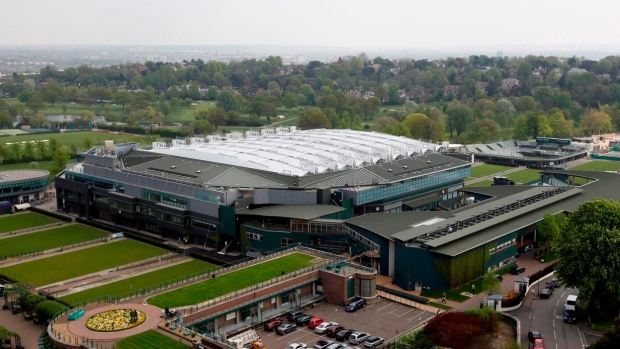 ​It's not official yet, but all signs point to the 2020 Wimbledon Championships being cancelled. The All England Club will hold an emergency meeting on Wednesday, but German Tennis Federation vice-president Dirk Hordorff reportedly told Sky Sports Germany that the decision to pull the plug has already been made. ​

"It's unthinkable," said Edmonton native Grant Cantin, who worked on the grounds crew at the All England Club for 17 years before leaving in 2018. "I mean, the last time it happened was during the Second World War, 1945. Everybody knows what Wimbledon is whether you're a tennis fan or not. It's something I never t​hought I'd see in my lifetime."

Cantin served as the head groundsman during his last two years in London and still has plenty of friends across the pond.

"It's a shock to everybody," h​e said. “Nobody was prepared for this, nobody expected this, there's no real Plan B so everybody is just going day-by-day. Next month is when the Wimbledon build-up starts and they put up the marquee tents and start getting ready and it’s crazy to think that won’t happen this year."

While the French Tennis Federation p​ostponed the French Open to September, the postponement option doesn't make as much sense for the All England Club, because it hosts the only major played on a living surface: grass.

TSN spoke to Cantin from his home in Stony Plain, Alberta. He provided insight about why cancellation was really the only option for Wimbledon this year. The following is an edited transcript of the phone interview.

Why can't the All England Club postpone the Championships to a later date?

"People are saying, 'Oh, you can play Wimbledon in the fall,' but when would you? You'd have to do it after the US Open and the French Open so that's late September and that would never work, because your daylight is getting less and less and by 6 pm you have to suspend play. The dew point starts a lot quicker so the courts probably start getting slippery by 5 pm. So, you'd probably have to stretch it out three weeks and make it maybe best-of-three sets for the men. And then there's the renovation period, we always have to renovate the courts, dig them up and regrow them before winter starts so you'd lose that window as well so you’d go into the next year with really bad courts."

"Renovations are always a race again​st the clock. You don't want to go into winter with no grass on the baselines. They could get a few done, but you don't want to compromise the surface for the following year. By October the days are shorter and temperatures are cooling off quick, which makes it tough to germinate grass seed and to grow it. In 2012 we reseeded the courts with pre-germinated seed to help speed up the process, because we only had three weeks between the Championships and the Olympics and although the courts looked great for the Olympics, the grass on the baselines only lasted a few days because it was so young. It could be done, but the cons outweigh the pros, I think."

How about doing the reseeding in the spring?

"The courts wouldn't be as good. The problem is the grass would be very young and the young grass on the baselines wouldn't last nearly as long. You want your rye grass to be nine months to a year old when you play on it for the Championships, because it's nice and strong and it will withstand the two weeks of play. If you did all this renovation work in the springtime, you'd be in trouble. So, I think Wimbledon will make the right decision by cancelling the whole event and move on to next year."

OK, let's say the French Open backs down from their new date and mid-September suddenly became available or maybe the US Open offers to move to a later date and somehow those days were available, could September work at all?

"Historically, September is a good month weather-wise, but the days are just too short. I guess you have the two stadiums with roofs so you could play there to the 11 pm (curfew), but I think you'd have to really revise the schedule. Do you cancel the junior event? Do you cancel the wheelchair event? But that's not a Wimbledon thing to do. Wimbledon would want to include everybody so unless they stretched it out for three weeks I can't see it happening. Trust me, I've thought about it many times."

So, cancellation really is the only option?

"I'm surprised they've taken this long to call it, but for insurance purposes I get it. I remember years ago when Wimbledon said they had insurance for disease pandemics and I remember thinking, 'That's a waste of money,' b​ut they're probably one of the few organizations insured and from what I understand the Lawn Tennis Association will still get its surplus, which is in the millions of pounds. At least their bases are covered and they're not like everybody else where they're scrambling for revenue. The staff will all be looked after."

With Wimbledon expected to be cancelled, that will leave the U.S. Open as the next major on the calendar with qualifying scheduled to start on Aug. 24 in New York, which is the epicentre of the COVID-19 outbreak in the United States.

"Right now we're optimistic and very hopeful that we will have the 2020 US Open in our scheduled dates and our planning for that is ongoing," said United States Tennis Association spokesperson Chris Widmaier. "That being said, obviously we all understand that this is an unpredictable, unprecedented and rapidly-changing environment so we are analyzing, discussing, exploring all types of scenarios in regards to this year's Open."

If they need to postpone it, how late can you push back the U.S. Open?

"So, we are developing that right now," Widmaier said. "I don't have specific dates yet. I think it's premature for us to put specific dates out there. If any change to the schedule needed to happen in regards to the U.S. Open we would do so in a collaborative manner with the respective tours, the ATP and WTA, and others within the tennis industry to try and make the best possible schedule."