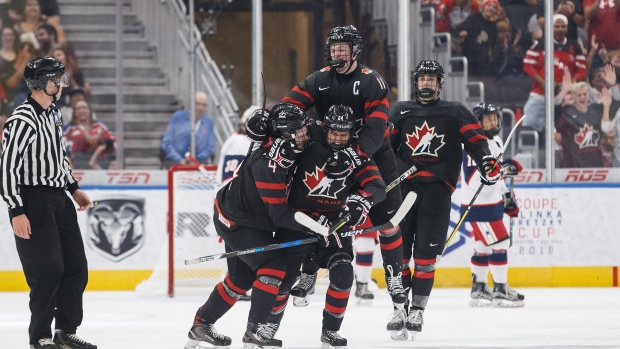 EDMONTON — An administrative decision by the organizers of the Hlinka Gretzky Cup ended up sending Canada to the tournament's gold-medal game.

Josh Williams scored twice, including the overtime winner, as Canada advanced to the final of the under-18 hockey tournament thanks to a controversial 6-5 victory over the United States on Friday.

Canada was credited with a goal on a shot by Dylan Cozens just as time expired in the third period. However, as there is no video replay available at the tournament, the goal stood, sending the game to overtime. Williams put away the winner 1:44 into the extra period.

"Prior to the competition, at the directorate meeting, it was decided there would be no video review because the three venues being used don't all have that capacity," said Hockey Canada president and CEO Tom Renney. "In the best interest of consistency and fairness throughout all three venues, it was decided by all teams — and signed off on — that the officials on the ice would make that call, as they did tonight.

"I feel for everyone — for our kids too. They know what happened."

Alexis Lafreniere, Jamieson Rees and Xavier Parent also scored for the Canadians in the semifinal. Nicholas Robertson had three goals and Aaron Huglen and Luke Toporowski replied for the Americans.

"It's hard for the guys. They played hard and battled valiantly and I think they deserved better. But we have to take the result and be men about it. It's difficult for these young kids, though," said U.S. head coach Cory Laylin.

"It's a bitter pill to swallow, for sure," added USA Hockey assistant executive director of hockey operations John Vanbiesbrouck. "It was determined before the tournament that they weren't going to use video review so we have to accept our fate."

Canada will play Sweden, which they defeated 4-3 in their final round-robin game on Wednesday in the gold-medal match on Saturday.

"For sure, if it would have been us we would have been frustrated," said Canada head coach Andre Tourigny of their tying goal being allowed. "It was a really tight call. The rules are the rules, and the call is the call.

"Our focus now is what we can do better in the final."

Canada has won gold 21 times and medalled 24 times in the 27-year history of the tournament, including winning gold in nine of the last 10 years.

The U.S. will face Russia for bronze.

The Americans started the scoring with a power-play goal 3:20 into the game, although play continued for more than a minute before it was determined that a high shot by Robertson (Peterborough, OHL) had actually gone in to the net before quickly exiting.

Canada responded with a power-play goal of its own just over a minute later as Lafreniere (Rimouski, QMJHL), the early first overall favourite for the 2020 draft, showed some poise in front of the net to beat American goalie Dustin Wolf (Everett, WHL).

Just over a minute after that goal, the U.S. regained the lead on a highlight-reel play as Huglen lifted the puck onto his stick behind the net and backhanded it lacrosse-style over the shoulder of Canadian goaltender Nolan Maier (Saskatoon, WHL).

Canada made it a 2-2 game eight minutes into the first period as Rees (Sarnia, OHL) battled for a puck in front of the American net before chipping it past Wolf.

The U.S. surged in front again with five minutes left in the opening frame when Robertson scored his second of the game on a backhand shot off of a faceoff.

Canada tied it up again midway through the second period as Parent (Halifax, QMJHL) scored on a shot from the high slot on the power play.

The Canadian squad took its first lead 3:31 into the third period when Williams (Medicine Hat, WHL) scored on a screened shot on the power play.

Robertson scored his hat trick goal with eight minutes to play on a quick wrist shot to make it 4-4.

The U.S. then regained their lead with 6:27 remaining on a goal coming off a scramble out front by Toporowski (Spokane, WHL).