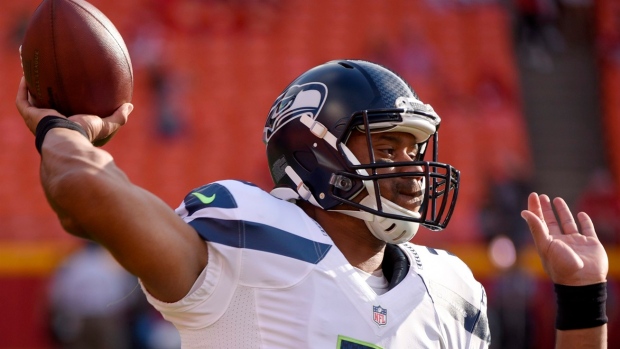 RENTON, Wash. - Seattle Seahawks quarterback Russell Wilson said Thursday he did not suffer a concussion in the NFC championship game against Green Bay, a day after comments in an article in Rolling Stone indicated Wilson may have suffered a head injury.

Wilson says that his comments were misunderstood and he did not have a head injury. Wilson took a big hit in the first half of the championship game from Green Bay's Clay Matthews following an interception. Wilson remained in the game and led Seattle's late comeback for a 28-22 overtime win over the Packers.

In the Rolling Stone article, Wilson raves about a product called Reliant Recovery Water — based in nearby Tacoma, Washington — of which Wilson is an investor. "I banged my head during the Packers game in the playoffs, and the next day I was fine. It was the water," Wilson was quoted as saying in the article.

After Seattle wrapped up its final full practice before its third preseason game at San Diego on Saturday, Wilson clarified what he was trying to convey.

"No, I didn't have a concussion. I guess it was perceived wrong. But no, I did not have a concussion," Wilson said. "I was saying that I had been consistently drinking the water for a month, month-and-a-half five to seven times a day and I was thinking, 'Maybe this stuff is helping me out.'"

Wilson added that some of his teammates — mentioning Kam Chancellor and Russell Okung specifically — have used the product.

Wilson is likely to see his most extensive time of the preseason on Saturday against the Chargers and look to get the Seahawks' first-team offence in the end zone for the first time.

The Seahawks have one offensive touchdown in the first two weeks of the exhibition season, that coming in the fourth quarter in their opener against Denver.

Wilson and the majority of Seattle's starters will play the entire first half and into the third quarter, coach Pete Carroll said.

"These guys need to play. They need the play time, they got to get ready," Carroll said. "You can't hide from it, it's coming. It's right around the corner, and they need to be fit and mentally right to play four quarters of football two weeks from now, so we got to take this next step."

NOTES: Carroll said there was no new communication with holdout SS Kam Chancellor and the Seahawks must move forward in getting ready for the start of the regular season. "Everything is as it's been. At this point it is important for us to continue to look, the opener is coming and we got to get those guys ready to play. So that's what we're doing," he said. ... CBs Richard Sherman and Will Blackmon are expected to play against the Chargers. ... LB Bruce Irvin, who suffered a concussion last week against Kansas City, was cleared to return to practice and is available to play against San Diego.