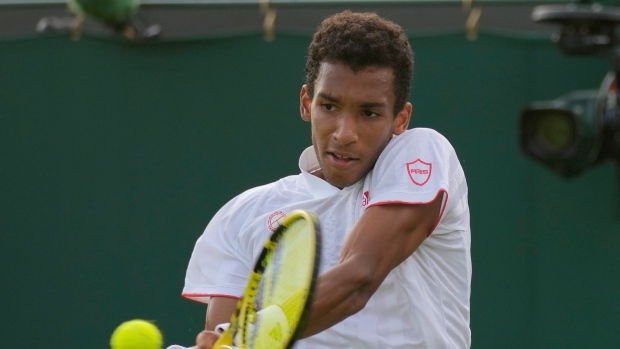 The 16th-seeded Auger-Aliassime fired 19 aces in the match and won 80 per cent of first serve points.

The 20-year-old Canadian also proved to be opportunistic, winning four of his five break-point chances.

"The crowd was good. I saw a few Canadian flags. That's always good to see," Auger-Aliassime said. "Canada Day always falls during Wimbledon. The last two times I've gotten a win on that day, so hopefully it will bring me luck over the rest of my career."

Ymer broke Auger-Aliassime twice on five chaces and had 28 unforced errors, 11 fewer than his opponent.

Auger-Aliassime faces Australia's Nick Kyrgios in a third-round match Saturday. The Canadian won the only other meeting between the two at the 2019 Queen's Club Wimbledon warm-up event.

"He's an amazing player," Auger-Aliassime said of Kyrgios. "We played in Queen's two years ago. Almost tiebreaks every set.

"He has everything that a player needs to play well, especially on grass. He serves amazing. It's going to be a tough match for me."

Auger-Aliassime also advanced to the third round in his Wimbledon debut in 2019 before losing to France's Ugo Humbert. He made it to the quarterfinals of the men's junior competition in 2016.

Denis Shapovalov of Richmond Hill, Ont., plays a third-round match Friday when he takes on two-time Wimbledon champion Andy Murray of Britain, a favourite at the All England Club.

"Obviously it's going to be my first time on Centre Court at Wimbledon, so it's definitely super exciting for me and my team and my career," Shapovalov said.

"Definitely a match I grew up wanting to play against Andy in the spotlight like this. It's going to be a lot of fun out there."

Note to readers: This is a corrected story. A previous version misspelled Mikael Ymer's last name.