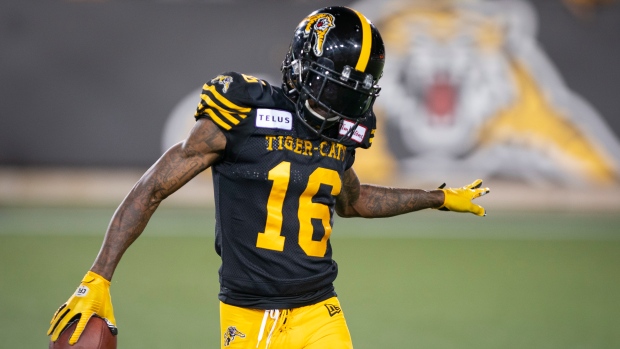 There's nothing quite like heading into a bye week off a big win.

Just ask quarterback Jeremiah Masoli after Hamilton defeated the Calgary Stampeders 30-23 on Saturday night to snap a dubious 15-game losing streak versus the defending Grey Cup champions. The Tiger-Cats will have that winning feeling right up to their home game July 26 versus the Winnipeg Blue Bombers.

"You get to rest, heal up and come back and still have that victory mindset," Masoli said about winning prior to a bye week. "If you lose, you're just thinking about it the whole time, you kind of can't wait to get back and prove yourself with another victory."

The win was also Hamilton's first at home over Calgary since a 24-17 decision Sept. 8, 2009. And the Ticats are 4-1 for the first time since '98 when they made the first of consecutive Grey Cup appearances against Calgary.

Hamilton lost to the Stampeders in 1998 but won the '99 Grey Cup game, its last CFL title.

Defensive lineman Ja'Gared Davis is in his first season with Hamilton after spending the last three years with Calgary. He said the key now for the Ticats is continuing the momentum upon their return.

"Nobody wants to go into a bye week with a loss in the back of their mind," he said. "We did win but at the same time we have to keep a mindset to stay hungry.

"It (Calgary win) is big . . . it's like climbing Mount Everest just to finally get over the hump because Calgary is, year in and year out, one of the best teams in the league. We played together, we fought together and we finished. When you're playing against an elite team like that, that's how you have to play the game."

The Alouettes fired GM Kavis Reed on Sunday, less than 24 hours after their 36-19 road win over the Ottawa Redblacks. Club president Patrick Boivin wouldn't say why the move was made but added it had nothing to do with on-field performance.

The timing of the move couldn't be worse with upstart Montreal (2-2) set to host Edmonton (3-3) on Saturday night. The Eskimos defeated the Alouettes 32-25 at Commonwealth Stadium on June 14.

Reed's abrupt dismissal is just the latest move in what's been a bizarre stretch for the franchise. The CFL is now running the Alouettes after taking ownership May 31 from American businessman Bob Wetenhall and his son, Andrew.

Prior to the club's season-opening game in Edmonton, head coach Mike Sherman was fired. He was replaced by Jones, the offensive co-ordinator who had no previous CFL head-coaching experience.

Despite interest in the franchise from Montreal businessman Clifford Starke and a group headed up by former Alouettes player Eric Lapointe, the CFL is currently negotiating exclusively with an ownership group headed up by Montreal natives Peter and Jeffrey Lenkov.

The Lenkovs were in Edmonton for the Alouettes' season-opening loss and Peter Lenkov tweeted Saturday he'll be in Montreal for Saturday's contest. Peter Lenkov is a Hollywood producer/writer while Jeff Lenkov is a lawyer.

There are reports one reason for Reed's dismissal was he'd come up with a system to circumvent the CFL salary cap. That's an interesting contention given Reed wouldn't be the first GM to have burned the midnight oil trying to find a way around the cap.

There were also allegations Reed, who was in his third season with the club, charged personal expenses to the Alouettes and hadn't paid over $6,000 in rent.

NEW INDUCTEES: The Winnipeg Blue Bombers have cornerback Less Browne and longtime team doctor Bert Langstaffe for induction into their Hall of Fame.

Browne played 51 games over three seasons with Winnipeg (1989-91), registering 27 interceptions. He had a team-record 14 picks in 1990 and in 2002 was inducted into the Canadian Football Hall of Fame.

Winnipeg appeared in the East Division final in each of Brown's three seasons there, winning the Grey Cup in 1990.

Langstaffe began working with the Bombers in 1972 and retired following the 2016 season. Browne and Langstaffe will be formally inducted Oct. 15.

THIS 'N THAT: Hamilton has four of the CFL's seven kick-return TDs this season, no other team has more than one. Masoli (1,517 yards) and Banks (36 catches, 506 yards) are tops in passing and receiving, respectively . . . The Ticats will know the status of linebacker Simoni Lawrence before their game versus Winnipeg. The CFL suspended Lawrence for two games for hitting Saskatchewan quarterback Zach Collaros in the head during Hamilton's season-opening 23-17 win June 13. Lawrence appealed it and met with an arbitrator last week. He has a team-high 23 tackles, three sacks and two interceptions this season . . . Montreal leads the CFL in rushing (168.3 yards per game), is second in turnover ratio (plus-six) and tied with Ottawa for second in points off turnovers (27). William Stanback has run for 303 yards the last two games and leads the league in rushing (457 yards, 7.4-yard average). Patrick Levels (31) also has a CFL-best 31 tackles.