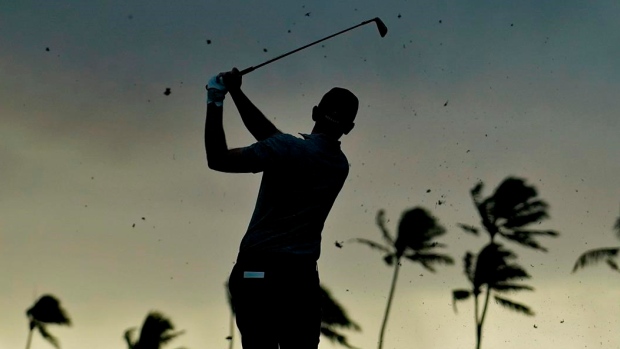 Only this was was Friday at the Sony Open.

There was no playoff, only a plane back to the mainland.

In wind that was vexing no matter how strong and soft greens so rare for this tournament, Thomas and Reed both missed the cut at Waialae and missed out on what could be a weekend where anything goes.

Brendan Steele birdied five of his last six holes — the exception was a double bogey — for a 4-under 66 that gave him a share of the lead with Cameron Davis of Australia, who also had a 66.

They were at 6-under 134, the highest score to lead the Sony Open through 36 holes since 2006. More unusual was the cut was at 1-over 141, leaving only a seven-shot differential between first and worst.

Five days ago, Thomas outlasted Reed in a dynamic playoff on Maui that lasted three extra holes and went to the very edge of darkness at Kapalua in the Sentry Tournament of Champions.

Neither will be around for the outcome on Oahu.

“I'm playing great, playing good enough to still be winning this week,” Thomas said after two double bogeys ruined his round of 71. “Probably a little exhausted from last week, which is a good thing. No, I mean, played like crap so I deserve to have the weekend off.”

It was his first missed cut since the U.S. Open last year at Pebble Beach.

Reed made a 35-foot par putt and chipped in for birdie. It was all the other putts he missed, along with a flubbed pitch that went into a bunker and led to double bogey, that cost him. He shot 74.

They both finished at 143 to miss by two shots.

They battled hard last week on a big course in big wind. Just a coincidence that both missed the cut? Reed wasn't buying.

“I was missing my putts short, I had two three-putts. I missed everything,” Reed said.

As he was signing autographs, he turned and smiled before adding, “I did sleep three hours more than usual last night,"

It was his first missed cut since the PGA Championship in May.

They had company. Defending champion Matt Kuchar made only three birdies in 36 holes and missed the cut by one. They all left behind a leaderboard more crowded than the H-1.

Collin Morikawa, the first-round leader, kept missing in the wrong spot and had to birdie his last two holes for a 70. He was among eight players who were one shot behind at 5-under 135, a group that included Keegan Bradley, Ryan Palmer, Russell Knox and Cameron Smith.

That's a long way off, especially in the gusts that approached 30 mph in the second round and greens at Waialae that are never this soft. The course is getting soaked by rain every night, with occasional pop-up showers — even when the sun is shining — during the day.

Approach shots that typically bounce forward are now spinning back. Pitch marks are found more easily than an ABC Store in Waikiki Beach.

That's usually a recipe for low scoring anywhere, but not in this kind of wind.

“I have not played in wind this tough,” Palmer said “You're pumping 6-iron from 145.. That says a lot of what the winds are doing.”

It was worse on Thursday, but no less a test.

Steele was poised for a big finish when he holed a 20-foot birdie putt on No. 4 and a 35-footer for birdie on No. 5, moving up the board with four holes to play in his second round.

And then the wind helped carry his tee shot out-of-bounds on the next hole, leading to double bogey.

Steele bounced back with a tee shot into 4 feet on the par-3 seventh, a 12-foot birdie on the eight and an up-and-down for birdie at the par-5 ninth.

“It was a wild finish,” Steele said. “I made one bad swing and made a double in between there. I was really happy with how I bounced back to make those good swings and good putts on the last few holes.”

Thomas had not finished out of the top 20 in the last seven months, and his confidence was high after winning last week. The last time he won at Kapalua, he came over to Waialae and shot 59 on his way to a PGA Tour record of 253 for 72 holes.

That won't be the case this time. Thomas couldn't get anything to fall, and it didn't help when he put his tee shot in the water on No. 2, his 11th hole of the round.

“I think honestly, playing the course as often as I have in the past hurt me this year because it's just so weird, the greens being as soft as they are,” Thomas said. “You have to get adjusted to that. But everybody has to — it's not just me.”