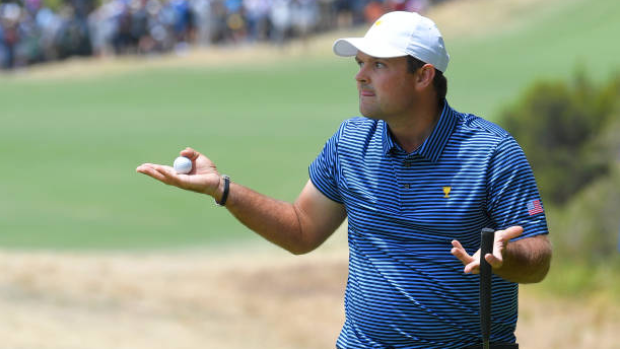 Patrick Reed continues to be a spectacle at the Presidents Cup.

In his first tournament since taking a two-stroke penalty last week for improving his lie at the Hero World Challenge, Reed responded to a heckler on Thursday by pretending to use his putter as a shovel. While watching his birdie putt on the 11th a fan yelled "miss it" at Reed. When the putt dropped, Reed raised his hand to his ear and then mimicked a shoveling motion twice with his putter, drawing a largely positive reaction from the crowd.

Patrick Reed having some fun with the crowd. #QuickHits pic.twitter.com/RFEz6kgaUQ

The response came one day after a fan was heard yelling,  "You're really going to make your caddie carry 14 clubs and a shovel?"

He said following his first round that the reaction was "exactly what I expected."

Reed, who finished two strokes back of Henrik Stenson at the Hero World Challenge after the penalty last week, was heckled later in his round Thursday on the 16th by two spectators wearing shirts that read “We love a Tiger, but not a Cheetah.”

The 29-year-old and his partner Webb Simpson lost their foursome match 3 and 2 to Marc Leishman and Abraham Ancer, marking the duo's second defeat at the tournament.

Reed, who declined interview requests after the round, will return to the course again on Day 3 Friday with Simpson against Hideki Matsuyama and C.T. Pan, in rematch from Day 1 at the event.