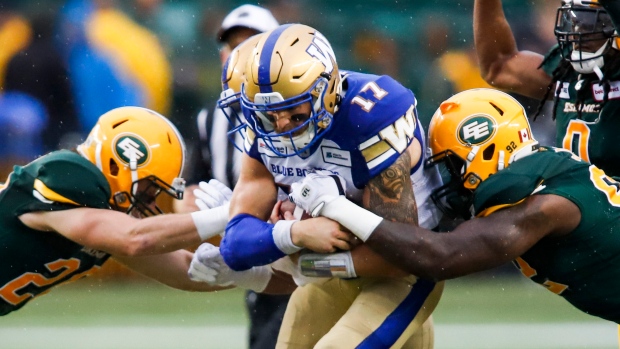 EDMONTON — It's not often that a quarterback records more rushing than passing yards in a game, but it was a surprising recipe for success for the Winnipeg Blue Bombers on Friday.

Backup quarterback Chris Streveler rushed for 95 yards and a touchdown against 89 yards passing as the Blue Bombers held onto sole possession of first in the CFL West with a 34-28 victory over the Edmonton Eskimos on a rainy evening.

"It was just a total team win," Streveler said. "I think we put some good drives together when we had to on offence. Sometimes the run game is working and I can't say enough about what the offensive line did tonight, especially with all of the rain.

"I feel great right now. It feels good to get that win."

Winnipeg head coach Mike O'Shea was pleased with Streveler's first start since taking over for Matt Nichols, who was put on the six-game injured list earlier in the week.

"He was awesome. Poised, ran the clock well," said O'Shea. "He executed the game plan and was excellent. He was tough, too. He runs angry."

It was the third win in a row for Winnipeg, which improved to a league-best 8-2.

Edmonton (6-4) was looking for its third straight victory and seventh of the season to keep pace with the Bombers, who are now four points up on second-place Edmonton while sweeping the two-game season series.

"We tried throwing the kitchen sink at them and their defence did everything. It's hard. We have been in scoring position against them a lot and they have stopped us multiple times. It is frustrating. In order to beat them, we know we have to finish those drives."

The Hamilton Tiger-Cats (7-2) sit atop the East.

It was a game that at one point looked like it would be decided by the kickers.

The Eskimos started the scoring with a 20-yard Sean Whyte field goal on the game's opening possession, with Winnipeg quickly responding with a 27-yarder from Justin Medlock.

The Blue Bombers took the lead late in the first quarter when Marcus Rios picked off a deflected Trevor Harris pass and took it 46 yards into the end zone.

Edmonton came back with a 37-yard Whyte field goal.

Winnipeg made it 17-6 on a two-yard touchdown run by Andrew Harris on the heels of a long run by Streveler.

Whyte notched a 24-yarder before Medlock closed out the first half scoring with a 51-yard field goal.

The Eskimos started the third quarter with Whyte's fourth field goal of the game, a 29-yarder, before Medlock responded with a 37-yarder.

Whyte added yet another 29-yard field goal to start the fourth and then a 21-yarder midway through the final frame to make it 23-18.

Winnipeg got some insurance with just over two minutes remaining as Streveler called his own number for a six-yard TD run.

Edmonton got its first touchdown in two games this season against Winnipeg with just over a minute left to play on a 75-yard TD pass from Harris to Tevaun Smith. The Eskimos had settled for 13 field goals leading up to the Smith TD.

The Esks then attempted an on-side kick but were unsuccessful, leading to a 50-yard Medlock field goal.

Whyte then booted his seventh field goal of the night — a 48-yarder as time expired.

Notes: It was the second and final meeting of the season between the two teams, with the Bombers winning the first contest 28-21 on June 27 in Winnipeg…Streveler made his fifth career CFL start and third against the Eskimos, previously holding a 1-3 record as a starter.