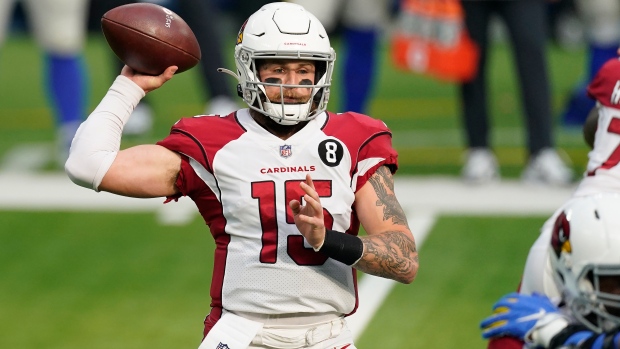 While Chris Streveler is currently focused on staying in the NFL, Blue Bombers general manager Kyle Walters admitted Monday that Winnipeg could be outbid in free agency if the quarterback returns to the CFL.

Streveler opened this season as the Arizona Cardinals’ third-string quarterback, but was waived in November. He finished the season on the Baltimore Ravens practice squad.

Walters said that the Blue Bombers would not be able to match if any CFL team offers Streveler starting-quarterback money after re-signing Zach Collaros on a one-year, $550,000 contract last week.

The 27-year-old Streveler played a key role for the Blue Bombers in 2019, making eight starts at quarterback during the season and throwing for one touchdown and receiving another in the team's Grey Cup win over the Hamilton Tiger-Cats.

“@cstrevy is focussed on the @NFL for the next few weeks … if someone (in the @CFL) is going to throw starter $ at him, we would not be able to afford him.” — @Wpg_BlueBombers GM Kyle Walters. #CFL #bombers

The Blue Bombers could also be saying goodbye to Canadian offensive lineman Drew Desjarlais this off-season.

Walters said Monday the 24-year-old has 12-to-13 NFL workouts scheduled and is expected to sign south of the border.

. @Wpg_BlueBombers GM Kyle Walters says 12-13 @nfl workouts for Cdn OL Drew Desjarlais, expects him to sign with one of them. #bombers

Desjarlais, selected fourth overall in the 2019 CFL Draft, has made 32 starts for the Blue Bombers over the past two seasons.