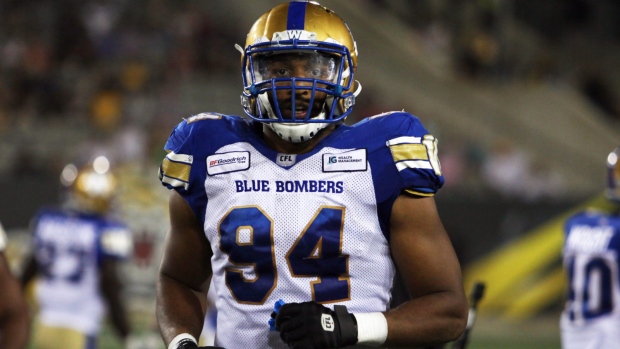 Kongbo, who was born in the Democratic Republic of the Congo before moving to Surrey, B.C., with his family when he was five, was selected fifth overall in the 2019 CFL draft.

The 23-year-old had 12 tackles and a sack in 12 games for the Grey Cup champs this year.

"When we selected Jonathan in (the) CFL draft, he chose to sign with our organization rather than wait a season to continue training," Bombers general manager Kyle Walters said in a statement. "This agreement came with the understanding that if he received any NFL interest, we would work with him to help him pursue those interests.

The 2018 fifth-round pick from Spruce Grove, Alta., played all 18 regular-season games for Calgary this year and made seven starts.

Selected in the fifth round by the Stamps in 2018, Lawrence dressed for all 18 regular-season contests in his second year with the Red and White and made a total of seven starts including six at centre and one at left guard. The University of Alberta product also was in uniform for the Western semifinal.

Lawrence played six games as a reserve offensive lineman during his rookie campaign.

"I'm extremely excited to be staying in Calgary," said Lawrence. "Over the last two years with the team, it's really become home for me and I'm looking forward to getting back on the field with the Stampeders."