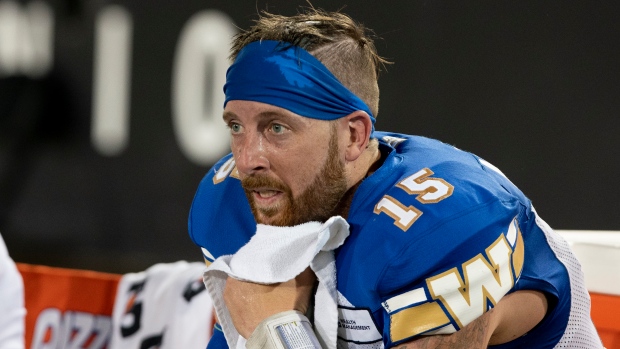 WINNIPEG — Blue Bombers starting quarterback Matt Nichols has been placed on the six-game injured list with an upper-body injury.

Head coach Mike O'Shea said after Monday's practice that the unspecified injury does not require surgery and Nichols will be re-evaluated in 4-to-6 weeks.

Backup pivot Chris Streveler will start when the CFL West Division-leading Bombers (7-2) travel to play the Edmonton Eskimos (6-3) on Friday.

Nichols was sacked by B.C. Lions defensive lineman Shawn Lemon with nine minutes left in the fourth quarter of Winnipeg's 32-16 victory over the Lions last Thursday. He fumbled the ball after the sack and walked to the locker room appearing to favour his arm. Streveler replaced him.

Last season, Nichols injured his right knee in training camp during a non-contact play and missed three regular-season games. Streveler, then a rookie, took the reins and the Bombers went 1-2 with him at the controls.

Nichols will become the seventh opening-day starting quarterback in the CFL to miss at least one game because of injury this year. Only Trevor Harris of the Edmonton Eskimos and Mike Reilly of the B.C. Lions have made every start.