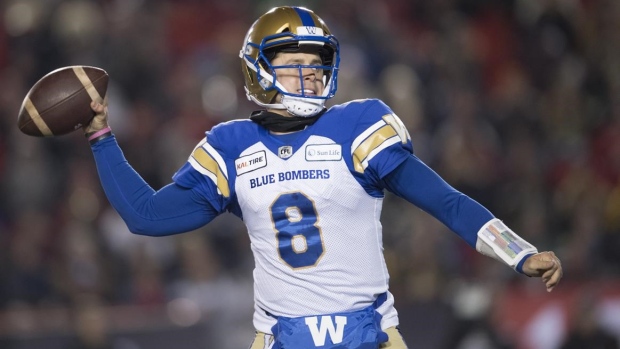 Like every athlete during the ongoing COVID-19 pandemic, Zach Collaros has had to make some adjustments to his workout routine. The Winnipeg Blue Bombers quarterback said he is adapting to his new workout space at his home.

“Obviously, I have to use my backyard,” Collaros told TSN’s Sara Orlesky. “It’s different than using turf or anything like that and you kind of feel like your neighbours are peering in and watching you, which I can’t stand.

“My wife always makes fun of me for that. I just always feel like people are looking at me while I’m jumping around in the backyard.”

While some players have had to get creative with their routines, Colloras said he’s had some help from his trainer, and has some new equipment at his house so he can continue working with some familiarity.

“I was able to move some stuff home from the gym that I’ve been training at. The garage is set up for me as a gym. I’ve ordered some stuff online to be able to throw the football in my backyard.

My trainer has been great … he’s been sending me stuff so I haven’t had to get too creative. Him allowing me to bring some of that stuff home has been great.”

Collaros admitted it’s been different, training on his own, and said it’s on him to make sure he gets all his work in, with the start of CFL training camps postponed indefinitely. The league on Tuesday announced that the season will not start until the beginning of July.

“You have to do more things in a confined space and really motivate yourself because it’s just you doing it.”