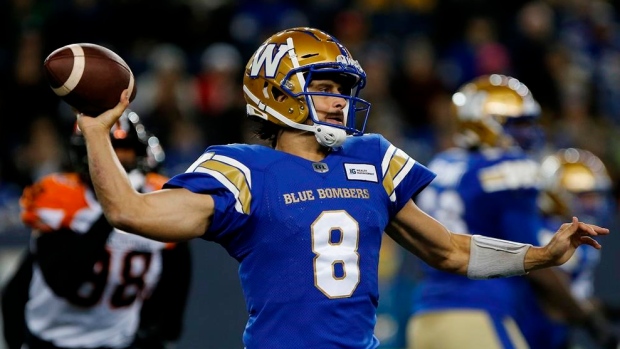 The Winnipeg Blue Bombers have agreed to terms with quarterback Zach Collaros on a one-year contract extension, the team announced on Thursday.

Collaros was scheduled to become a free agent next month.

The 33-year-old had a banner season in 2021 for the Blue Bombers as he threw for 3,185 yards and 20 touchdowns on his way to capturing the CFL's Most Outstanding Player award.

Collaros was also named MVP of the 108th Grey Cup as he led the Bombers to a 33-25 overtime victory over the Hamilton Tiger-Cats as they defended their championship.

The Steubenville, Ohio native joined the Blue Bombers in an October 2019 trade with the Toronto Argonauts and has posted a 17-2 overall record, including two Grey Cup championships, as a starter.

Collaros has also spent time with the Tiger-Cats and Saskatchewan Roughriders over his CFL career that began in 2012.