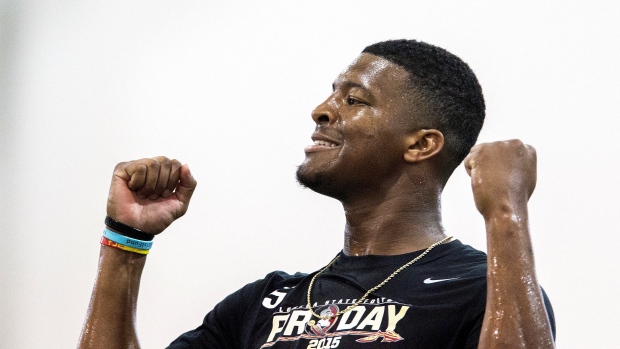 Jameis Winston all but confirmed with his Tuesday pro day performance that he’ll be selected first overall in the 2015 NFL Draft.

Originally scheduled to throw around 75 passes, the Florida State quarterback threw 102 balls and was mostly impressive in front of all 32 NFL teams who showed up to the Seminoles’ pro day.

91 of the 102 passes were caught while four of the 11 misses were classified as drops.

According to media reports, Winston showed good accuracy throwing with set feet and on the run, Seminoles QB coach George Whitfield chasing him with a broom to simulate a pass rusher.

The concerns with Winston have been largely off-field, but the redshirt sophomore performed well in that regard as well, supporting fellow teammates during their workouts and saying the right things to the accumulated media, according to reports.

Picking first and with no fear of tipping their hand, Tampa Bay Buccaneers GM Jason Licht seemed to confirm speculation the Bucs plan to take Winston to start the draft.

“Very good. Excellent. Had a great day,” Licht told JoeBucsFan.com.  “This was outstanding.  He threw a full nine innings.”