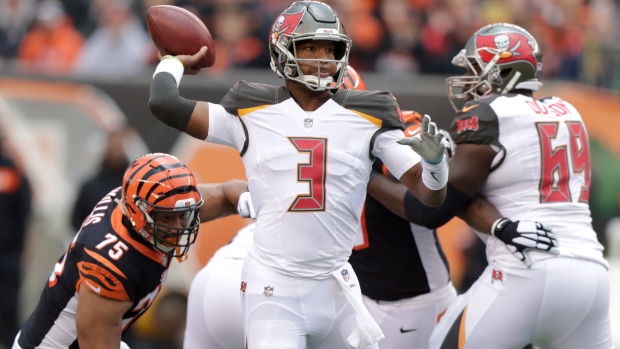 Jameis Winston wants to be the heaviest quarterback in the NFL next season.

"I’m going to play bigger this year,'' the Tampa Bay Buccaneers pivot said on Saturday at head coach Bruce Arians' charity golf tournament. "I’m about 250. Yeah. A solid 250. It’s just about hydration and being at the peak body, too.''

Currently, the 25-year-old Winston is listed at 6-foot-4 and 231 pounds. The heaviest quarterbacks in the NFL last season were the Carolina Panthers' Cam Newton (6-foot-5 and 245 lbs) and Joe Flacco (6-foot-6 and 245 lbs), now of the Denver Broncos.

For his part, Arians seems fine with the plan, as long as the added weight isn't "bad."

“No, I mean whatever he feels comfortable at without bad weight, stuff that will hurt your scrambling or hurts your mobility,’’ Arians said. “It sure helps when they try to sack you.’’

"Sitting in the pocket, you’re going to take some hits," Licht said. " [Pittsburgh Steelers QB] Ben Roethlisberger still does and [Retired Arizona Cardinals QB] Carson (Palmer) did. So you want to put some armor on. I still think that he’s going to be mobile. It’s not like he was a 4.4 (in the 40-yard dash) guy to being with. But he’s got his own unique athleticism to shed guys. I think it actually could be helpful in that way."

The first overall pick of the 2015 NFL Draft out of FSU, Winston is entering his fifth pro season.