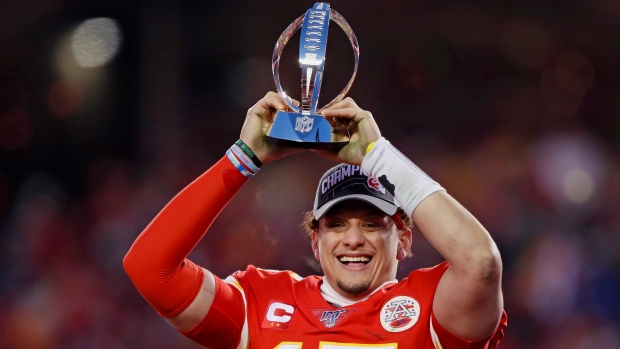 KANSAS CITY, Mo. — The team that would eventually take the Kansas City Chiefs back to the Super Bowl for the first time in 50 years was under construction long before general manager Brett Veach and coach Andy Reid finally laid the cornerstone.

Patrick Mahomes simply allowed them to erect the walls faster and higher than anyone thought possible.

The story of how the Chiefs were built doesn't begin or end with the record-setting quarterback, but everything certainly revolves around him. The reigning league MVP's uncanny ability to make every throw imaginable, his competitive drive and willingness to tuck and run, and his leadership in the locker room have all been instrumental in helping the Chiefs advance to the championship game against the San Francisco 49ers next weekend.

Even though he missed most of three games because of a knee injury, and was hobbled in a handful of others with a sore ankle, the star quarterback still threw for more than 4,000 yards with 26 touchdown passes and only five interceptions.

His value doesn't end there, either. Mahomes remains on his rookie contract — at least for now — and that allowed the Chiefs the financial flexibility to rebuild an inept defence into one that was among the NFL's best late in the season.

The Chiefs knew after they failed to stop the New England Patriots in overtime in last year's AFC championship game that they needed to make changes, and coach Andy Reid made the difficult decision to relieve Bob Sutton of his duties as their defensive co-ordinator. He brought in Steve Spagnuolo, who in turn implemented an aggressive 4-3 defence, and Veach did his part by overhauling the personnel on that side of the ball to better fit the new scheme.

There were pieces already in place thanks to a couple of successful drafts, including Pro Bowl defensive tackle Chris Jones, and a couple of free-agent signings last year helped the linebacker group. But it was Veach's pursuit of defensive end Frank Clark and safety Tyrann Mathieu that ultimately put the Chiefs defence over the top.

The Chiefs traded a load of draft picks to Seattle for Clark, then gave him a massive $105.5 million contract, and he lived up to the investment by giving them a fearsome pass rush. Mathieu arrived in free agency thanks to a $42 million deal, and he not only brought play-making ability to the back of the defence but an unmistakable swagger to the whole team.

“Last year when the season ended, we knew we had work to do. We put a plan together,” Veach said. “We believed in the guys we went after. We knew we had to field a defence to complement our offence and we did that.”

Those were the big names that shored up the defence, but other pieces came along too. The Chiefs brought in veteran cornerback Bashaud Breeland and linebacker Damien Wilson, and they drafted safety Juan Thornhill and defensive tackle Khalen Saunders, and all four of them have played an integral role this season.

“Spags has done a great job with that group,” Reid said. “He has guys with him on the defensive side that he was familiar with. He'll be the first to tell you, that is such a big part of it. He didn't have to teach the coaches — the coaches just hit the ground running and already knew what was expected of them. So the players go, ‘Man, all these guys believe this, they can teach it, they’re all tied in.' With that, there was a confidence that was built in. Even when things start off slow, the guys are going, ‘We’re this close to turning things around again to the way we want it.' And they just keep at it.”

While the Chiefs overhauled their defence from last season, the offence merely needed a few finishing touches. They had added wide receivers Tyreek Hill and Demarcus Robinson along with tight end Travis Kelce through the draft, and they had added running back Damien Williams and wide receiver Sammy Watkins through free agency in previous years.

The offensive line returned from last season largely intact, and the Chiefs merely added a couple of reinforcements — Stefan Wisniewski even worked his way into the starting lineup, proving to be much more than just a depth piece.

They also added wide receiver Mecole Hardman, who was voted to the Pro Bowl as a return specialist, along with running back Darwin Thompson and offensive lineman Nick Allegretti through the draft. All have had a role this season.

Now, with a vastly improved defence to match the Chiefs' already prolific offence, they have finally taken the franchise back to the Super Bowl for the first time since beating the Minnesota Vikings for their only championship in 1970.

“I think the mentality of these guys in the locker room is that we want to get the big one and not fall short,” Mahomes said. "We want to make sure that we’re going to the Super Bowl and we’re going to win it and not regret not preparing or doing whatever it takes to do that. I think with the guys in this locker room we’re going to take advantage of every day. It’s a long build over this next week and a half or whatever it is. We’re going to build every single day and just taking advantage of it and hopefully just getting there and playing our best football and getting a chance at winning it.”