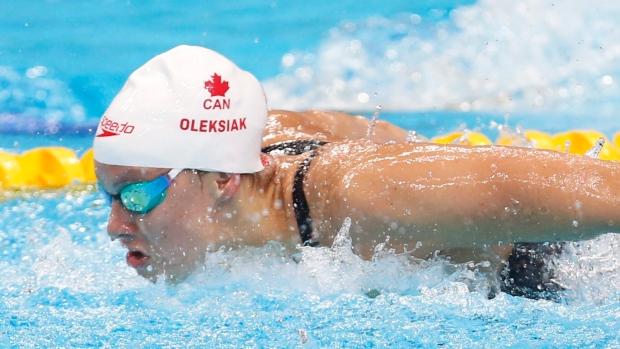 "I met him at the pool," recalled Oleksiak with a smile. "I didn't really 'meet' him. I was just trying to do my warm down. I kind of was, like, peer pressuring him to get into the pool. He was standing in front of me and I was like, 'Well, are you going to get in?' And he turned around and was like, 'Don't rush me.' And my heart stopped beating. I got a little scared. Every swimmer is obsessed with Michael Phelps, so I was like, what do I say now? I just went quiet. I was just like, okay, I'm done. I'll wait for Michael Phelps to do what he's got to do."

Oleksiak, just 16 at​ ​the time, wasn't willing to wait her turn in the pool during that meet. Originally tabbed for success in Tokyo, Oleksiak became Canada's breakthrough star in Rio, where she claimed four medals, including gold in the 100-metre freestyle. It was the biggest single Summer Games medal haul in Canadian history. ​

Phelps, meanwhile, went out on top in his final Olympics with five gold medals.

The pair of swim stars have met up a couple times since that initial encounter and remain in touch. They don't talk "super often," Oleksiak said, but Phelps serves as a sounding board for the teenager, who turns 20 in June.

"I love to get other people's opinions on things – my parents, my agent, my friends – I like to get everyone's opinion on things before I jump into something," Oleksiak said. "So, sometimes I'll even loop Michael in and be like, 'Hey, how do you feel about this? Would you do this? Should I do this?' and see how he feels about it. He's really helpful. I can literally call him any day and he's very easy with it."

For someone who happens to be the most decorated Olympian in history with 28 medals, 23 of them gold, Phelps sounds like a pretty down-to-earth guy.

"I guess he's just a regular guy, but I still fan girl a bit," Oleksiak admits. "If he ever compliments me or anything like that I'm still like, 'Oh my goodness, I can't believe Michael Phelps just complimented me.' I definitely take his opinions to heart and, I mean, he's awesome to go to."

The latest opinion came in the form of a book recommendation. Phelps encouraged Oleksiak to read, The Power of Now: A Guide to Spiritual Enlightenment, by Eckhart Tolle, which she has turned to during the COVID-19 pandemic.

"It teaches you to be more present in your everyday life and not worry so much about the future, the past and what's going to happen, and just taking advantage of everything you can right now," Oleksiak said. "It's super awesome and it really changed my perspective on a lot of things. I've talked to Michael about it and it has eased a lot of anxiety that I had about things in the future."

Canadian Olympic gold medalist Penny Oleksiak joins @markhmasters to talk about how difficult it was to process the news about the Olympics being postponed and more: https://t.co/aWFE2S2Roi pic.twitter.com/9tdmlitMN0

It would certainly be easy for Oleksiak to get stressed right now. The coronavirus outbreak caused the Tokyo Olympics, the focus of so much of Oleksiak’s effort and intensity, to be pushed back to 2021.

"At first it was a little difficult to change my mindset, because it was a couple weeks out from trials when we found out we weren't going to go to the Olympics this year. So, I was a little upset, because I was so focused on it and put everything into it,” she said. “I literally lived, breathed…for swimming and the Olympics so I was a little disappointed. But it gave me a chance to learn from whatever mistakes I made from last year and perfect it for next year."
Like what?

"I kind of pulled back on my training a little bit. I used to do spin classes. I used to do one-on-one CrossFit classes ... just to get extra activity in and I think, as the years went on and as I got older my body changed and I pulled back on that a little bit,” she said. “I'm looking to get more into that before the Olympics and taking up more spin classes, doing more one-on-one CrossFit classes and everything like that. Going into the next Olympics, I really want to be better with that and getting in as much exercise as I can and kind of taking every opportunity I can to get better."

Oleksiak usually swims daily, but for now is cooped up in her Toronto apartment with a stationary bike and some weights. She's using the time to create a game plan for the coming year.

"I've tried to figure out ways to make my life easier when we get out of this pandemic," she said. "I'm just finding easier meals to make and stuff like that so when I go back to swimming and training and everything, I'm ready to go."

Oleksiak is also using this time to help promote Canada's frontline workers during the pandemic via a new initiative from Cheerios. The cereal's parent company, General Mills, will donate $500,000 to Food Banks Canada along with $600,000 worth of food product, and is shifting its Olympic campaign to focus on food bank workers.

As part of the project, Oleksiak spoke with Lori McRitchie, the executive director of the food bank in Airdrie, Alta.

"She's super sweet," Oleksiak said. "She taught me so much about food banks and the importance of food banks right now. She was telling me about how Canadians can help with aiding them and making things easier and it was just super awesome meeting her."

The pair will be linked in an upcoming social media campaign.

Oleksiak, courtesy her performance in Rio, has become a prominent figure on Canada's sporting landscape. And while she may face high expectations and now have Phelps in her contact list, Oleksiak insists she hasn't changed all that much since she burst onto the Olympic scene four years ago.

"I wouldn't say, personally, I'm that different. But I think I've definitely learned a lot in the last few years and I'm hoping to really apply it over the next year,” she said. “I have a whole other year now and I'm really excited for it."