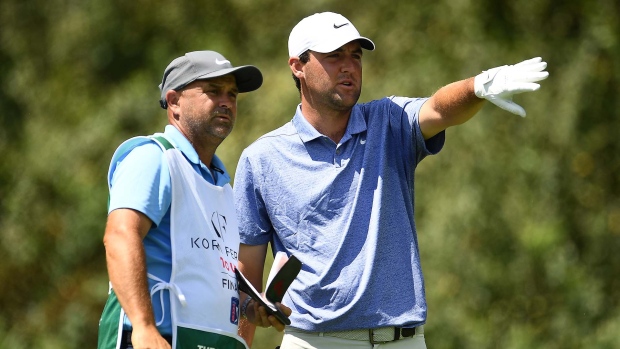 MEXICO CITY — Most satisfying to Scottie Scheffler in his rookie season on the PGA Tour is his steady, consistent play.

It has him going places in a hurry.

One year ago, Scheffler missed the cut in a Korn Ferry Tour event in Florida and was No. 830 in the world. Now he is in his first World Golf Championships event in Mexico City and not the least bit fazed.

“I'm not really a long-term goal guy,” Scheffler said Tuesday. “I don't overthink things. If I set long-term goals, I focus too much on the future. Being in the present is the better way to go.”

He didn't reach No. 51 in the world by accident.

Scheffler, who earned a business degree from Texas in four years, had a pair of runner-up finishes on the Korn Ferry Tour and then won twice, including the post-season. He won the points list, was named player of the year and rose to No. 87.

Moving straight to the PGA Tour, he had four top-10 finishes in 11 starts, and three good chances at winning. He was two shots out of the lead going into the final round in Bermuda, one shot behind at Sea Island and tied in the California desert.

“I felt like it's been consistent,” he said. “I missed those two cuts (Torrey Pines and Phoenix) and had one other start I was unhappy with (tie for 74th in Las Vegas). There's been a lot of decent finishes."

He needed a little help to get to the Mexico Championship. Eight eligible players chose not to come to Mexico this year. To fill the field of 72, officials went down the world ranking beyond No. 50. Scheffler was next in line at No. 51. Tony Finau then withdrew, opening the last spot to Sung Kang.

Scheffler is virtually a lock to stay among the top 64 and get into the next World Golf Championship, the Match Play at Austin Country Club where his Texas Longhorns occasionally practiced. And if he can nudge his way into the top 50, he would get into the Masters. That's rare for a PGA Tour rookie without winning a tournament.

None of this is occupying too many of his thoughts.

“I just keep going,” Scheffler said. “It's nice playing through the season. There's not much time to sit around and think about this stuff.”

The USGA has updated its family policy to allow players eligible for its championships to defer playing because of maternity or paternity leave.

Stacy Lewis, who had her first child in 2018, was among those offered input on the updated policy. It gives players who are exempt from qualifying or who have qualified by other criteria a one-year deferral. Players also can ask for a one-year extension of the deferral if the USGA agrees to the exceptional circumstances of the request.

"Updating our family policy was an opportunity to support players as they welcome new family members and also to go a few steps further," said John Bodenhamer, senior managing director of championships. “We are pleased to have a policy that affords players more balance between parenthood and competing at the highest levels.”

Under the policy, players can now freeze their world ranking before going on leave. The policy applies to all 14 professional and amateur events run by the USGA.

Martin Trainer returns to the Puerto Rico Open to defend his title with a lot more confidence than he had. Trainer tied for 47th in the Genesis Invitational, which doesn't sound like much until compared with the previous year.

"Making the cut. That's a good way to go into it," Trainer said after he finished up at Riviera.

It was the first 36-hole cut Trainer made since he finished 66th in the Valero Texas Open a week before the Masters. He then went 17 straight events without making the cut. In fact, the only cuts he made since winning the Puerto Rico Open last year were Bay Hill (tie for 66th), The Players Championship (tie for 41st), the Texas Open and the Sentry Tournament of Champions at Kapalua, where he finished 34th in a 34-man field.

“You just keep going. Keep hitting it. That's all you can do,” he said. “I just kept going, trying to figure it out, week to week.”

Mickey Wright, who died Monday at age 85, preferred a private life after her retirement from competition. But she stayed involved through keeping statistics, reading and watching. She also kept in touch out of the blue.

Judy Rankin, who joined the LPGA Tour during Wright's greatest years, said the last time she talked to Wright was a year ago Tuesday. Wright called to wish her a happy birthday.

That wasn't the only time. Rankin said Wright called her when her husband, Yippy, died of cancer. She called when Rankin was diagnosed with breast cancer, and she sent Rankin a message when she was the Memorial honoree last year at Muirfield Village.

“She always called on the big times in life,” Rankin said.

Patrick Cantlay found the right doctor and created a spot in his schedule. He is missing the Mexico Championship this week to have elective surgery on a deviated septum that has been causing him trouble sleeping.

"I didn't meet a doctor that I thought could do a better job until recently," Cantlay said.

He first had the procedure in the fall of 2018. Cantlay said another surgery is required to "clean it up a little bit." The septum divides the nostrils, and surgery promotes better air flow and helps with falling asleep and staying asleep.

Doing the surgery now should allow Cantlay, the No. 6 player in the world, to return for The Players Championship or the weeks leading to the Masters.

RORY THIRD AT BEING NO. 1

Rory McIlroy extended his lead at No. 1 in the world and is likely to stay there another week because he is playing the Mexico Championship and Brooks Koepka is not.

That would give McIlroy the third-longest tenure atop the ranking since it began in 1986.

Volvik has agreed to become title sponsor of the Founders Cup in Arizona next month on the LPGA Tour. ... Adam Scott has 14 victories on the PGA Tour, tied with Bruce Crampton among Australians. He's still behind the 20 titles won by Greg Norman. ... Ryan Palmer made a 9 on the par-3 14th hole at Riviera on Saturday, when it took him six shots to get out of a bunker. On Sunday, he made a 2. ... Charley Hoffman was elected chairman of the Players Advisory Council, meaning he will serve a three-year term on the policy board starting next year. Hoffman won over Justin Thomas and Peter Malnati. ... The R&A and the Annika Foundation have announced the Women's Amateur Latin America to be played Sept. 3-6 in Argentina. The winner receives an exemption to the Women's British Open.

Australians have won three times in the last six weeks on the PGA Tour, matching the total from the two previous seasons.

“They can throw away that distance report thing now because that's a great test of golf out there.” — Harold Varner III on Riviera Country Club.