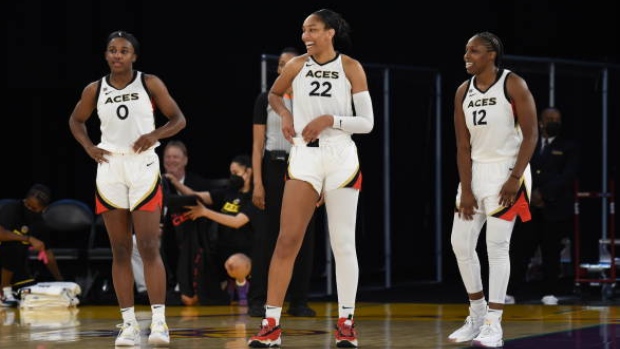 COLLEGE PARK, Ga. — A'ja Wilson bounced back from one of the worst games of her career with 21 points, 12 rebounds and seven assists to help the Las Vegas Aces beat the Atlanta Dream 78-71 on Thursday night for coach Bill Laimbeer's 300th career victory.

Dearica Hamby added 20 points and nine boards, and Chelsea Gray, who has made 24 straight free throws, connected on two at the stripe with 37.2 seconds left to extend Las Vegas' lead to 78-71.

Atlanta was just 4 for 16 from the field in the fourth quarter, getting outscored 17-9.

Wilson had just four points, going 1 for 15 from the field in a loss to Connecticut on Tuesday.

Angel McCoughtry, who spent 10 seasons with Atlanta, checked in for Las Vegas with 7.9 seconds left in the fourth quarter to an ovation from the crowd. McCoughtry, who was the No. 1 overall draft pick in 2009 by Atlanta, has missed the entire season for the Aces after suffering an ACL injury in the preseason.