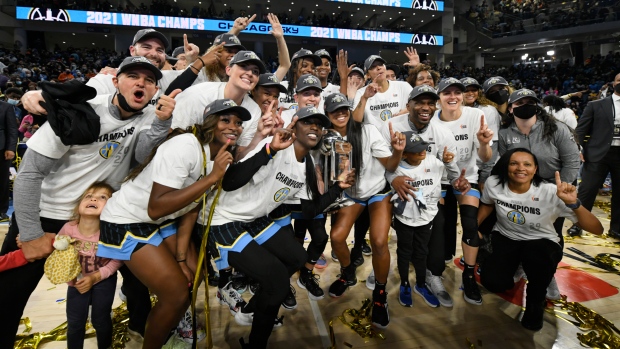 Single-elimination playoff games are a thing of the past for the WNBA.

The league announced a revamped playoff format for 2022 on Thursday.

"We have been evaluating different playoff formats over the past 12 months, and the new playoff format being announced today will enable fans to engage with all of the league’s best teams and top stars right from the start of the postseason with all eight championship contenders immediately involved in exciting, first-round action,” WNBA commissioner Cathy Engelbert said in a statement. “Following significant discussions with our Competition Committee and a Playoff subcommittee we formed last year, it was clear that while the prior format’s single-elimination games created a win-and-advance level of excitement to the start of the postseason, the new best-of-three series format will provide added opportunities to create and showcase rivalries with all playoff-eligible teams participating.”

Going forward, the league postseason will feature three rounds played in a best-of-three-five-five format. The top eight teams in the league based on winning percentages over a 36-game schedule, regardless of conference, will make the playoffs. With no first-round byes, all eight teams will participate in the opening round in a bracket format. There will be no reseeding after each round.

For the first round, the higher seed will host the first two games with a third game, if necessary, to be played at the lower-seeded team's arena. Both the semi-finals and Finals will follow a 2-2-1 format.

The revamped playoffs could add as many as eight additional playoff games.

The Chicago Sky won the 2021 WNBA Finals in October.