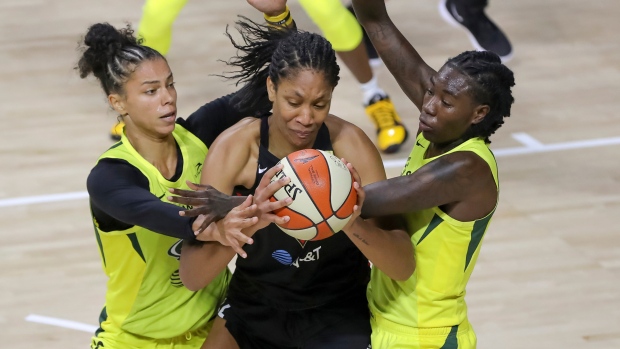 The WNBA regular season is starting to wind down, but the playoff picture is already taking shape with six teams (Seattle Storm, Las Vegas Aces, Los Angeles Sparks, Minnesota Lynx, Chicago Sky and Phoenix Mercury) clinching spots in the postseason. Eight of the league’s 12 teams will make the playoffs, making the battle for the last two spots even fiercer.

The Storm have held first place for much of the season as they sit with a 15-3 record, but their grip on the top has loosened in recent weeks and the Aces are now only one game back. Here’s a look at the early contenders and the teams still looking to clinch.

The race for first

The top two teams in the WNBA for the majority of the regular season have been the Storm and the Aces. While both were in the playoffs last season, they have taken a notable jump into contender status this year due to the MVP calibre play of their respective superstars.

The Storm are still in the driver’s seat as they head into the playoffs. Without Breanna Stewart and Sue Bird all of last season due to injuries, Seattle has reaped the benefits of having their stars back in the lineup and they look more like the team that took home the 2018 WNBA title.

Averaging 19.6 points, 8.3 rebounds and 3.4 assists per game, Stewart has returned to MVP levels after missing 2019 with an Achilles injury that required surgery.

On the Storm’s heels for first place are the Aces. A’ja Wilson has been neck and neck with Stewart all season for best player status with a stat line of 20.3 PPG, 8.4 RPG and 1.9 APG in 2020. At 14-4, the Aces beat the Storm in their only meeting so far this season and have one more matchup before the playoffs begin.

So far, the New York Liberty are only the team to be officially eliminated from playoff contention, leaving five teams to fight it out for the last two spots.

Sitting at seventh and eighth in the league standings respectively are the Connecticut Sun and Dallas Wings. For the Sun, stalwarts Alyssa Thomas and Jasmine Thomas have struggled with injuries in recent weeks and their health is a question mark going forward. DeWanna Bonner has stepped up even more offensively, recording 20+ points in four consecutive games.

The Wings have the league’s leading scorer in their corner with Arike Ogunbowale averaging 21.3 PPG. On a young team that missed the playoffs last season, she will be the difference maker in the final stretch for a postseason berth. One player who has continued to grow for Dallas is 2020 No. 2 pick Satou Sabally who is the Wings’ second leading scorer at 13 PPG and leads the teams in rebounds at 8.1 per game.

Two teams that were in the hunt, but have fallen off are the Indiana Fever and Washington Mystics. The Fever have dropped seven games in a row and haven’t made the playoffs since 2016. Despite having four players on the roster averaging 10 or more PPG, including Kelsey Mitchell at 17.6, the Fever have struggled going just 1-9 in their last 10.

Prior to winning their last game, the Mystics had dropped five games in a row. Already short handed, coming into the season without the services of Elena Delle Donne, Tina Charles and Natasha Cloud for varying reasons, the defending champions brought a younger and more inexperienced roster to the WNBA bubble in Florida and it has showed.

Another team that has suffered growing pains this season is the Atlanta Dream. While the Dream technically remain in the hunt at 1.5 games back of the Wings for eighth place, they aren’t a team that is ready to contend. Rookie Chennedy Carter is a contender for rookie of the year, recording 16.5 PPG (tied for the team lead with Betnijah Laney), 2.2 RPG and 3.5 APG.