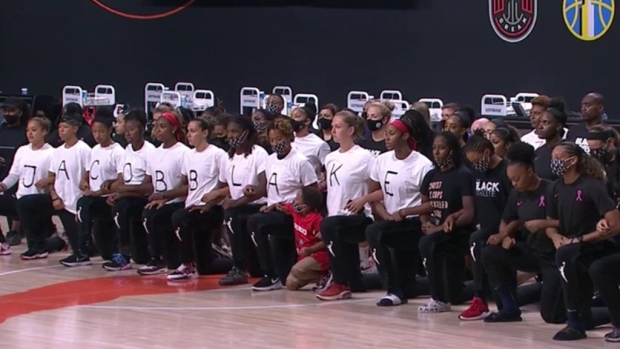 The WNBA has postponed three games scheduled for Thursday night as its players continue to protest against anti-Black racism and police brutality after Sunday's shooting of Jacob Blake in Wisconsin.

The following was released by the WNBA: pic.twitter.com/1QFpQJxrYU

"As the WNBA players continue discussion and reflection on recent events, the WNBA announced that the three games scheduled for this evening (Chicago Sky vs. Indiana Fever; Dallas Wings vs. New York Liberty; Las Vegas Aces vs. Seattle Storm) have been postponed," the league said in a statement. "Information regarding rescheduling of yesterday and today's games will provided when available."

There were three games set for Wednesday night - Washington was set to play Atlanta, Minnesota was going to face Los Angeles and Connecticut was to play Phoenix. Players from the Mystics, Dream, Sparks and Lynx were talking on the court for about an hour deciding whether to play or not before the decision was made to call off the games prior to tip-off between Washington and Atlanta.

All four teams took a knee at centre court before leaving.

Wednesday night's move came hours after the NBA called off its three playoff games. In addition, two MLB games were called off as well as five MLS matches. Thursday's NBA games have also been postponed.

The WNBA and its players have dedicated the 2020 season to social justice. Players have been wearing the name of Breonna Taylor on the back of their uniforms all season long.