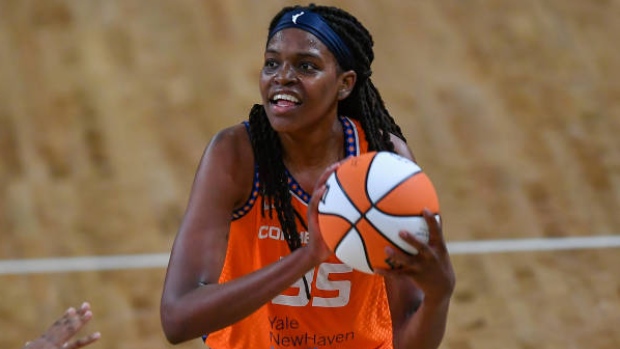 As the WNBA is set to take a month-long hiatus on July 11, the league’s 25th season has not lacked excitement so far. From buzzer-beaters to several players turning in MVP-level seasons, the WNBA is as competitive as it’s ever been. Here are five takeaways from the season so far.

The WNBA has seen several players put themselves in MVP contention so far in 2021.

In Seattle, both Breanna Stewart and Jewell Loyd lead the way for the league’s leading team. Stewart continues to be her usual excellent self, averaging 20.3 points, 10 rebounds and 2.6 assists.

With the New York Liberty, reigning Most Improved Player winner Betnijah Laney continues to build off last season’s success with another career year in the making. With 19.4 PPG, 4.2 RPG and 5.1 APG, Laney has been New York’s best player.

At 32 with a WNBA MVP award under her belt, Tina Charles continues to find new heights in her first season with the Washington Mystics. With a career-best 25.3 PPG, Charles leads the league in that category to go along with 9.6 RPG and 2.2 APG.

However, the MVP so far this season has been the Connecticut Sun’s Jonquel Jones. While Jones has been away for most of June playing for Bosnia and Herzegovina at the FIBA European women's basketball championship, she has turned in a dominant season with 21.6 PPG (2nd) 10.4 RPG (1st) and 3.0 APG. After sitting out the 2020 season with a medical exemption, Jones’s combo of size and skill has been lethal this season.

In her first season with the Mercury, Kia Nurse has made herself a fixture in Phoenix. Starting all 13 games so far this season, the 25-year-old Hamilton native is averaging 10.1 PPG, a career-high 3.3 RPG and 2.1 APG. After a down year shooting in 2020, Nurse has rebounded with better numbers, jumping from 27.3 to 34.1 per cent from the field and 23.8 to 32.4 per cent from beyond the arc.

Unfortunately for Natalie Achonwa, her first season in Minnesota hasn’t gone as planned. Currently out with an MCL sprain, Achonwa has only appeared in eight games so far this season, averaging just 11.3 minutes.

Likewise for fellow Canadian and Minnesota Lynx teammate Bridget Carleton, she has seen fewer minutes this season and her numbers have dipped after a breakout year in 2020.

One team that has struggled to find its way this season has been the Minnesota Lynx. A stacked roster with aspirations to contend, the Lynx have struggled to put it all together consistently in 2021. Injuries have hit the Lynx early, including to Achonwa, Aerial Powers and first-round pick Rennia Davis.

After starting the season 0-4, veteran guard Layshia Clarendon has been a spark for the Lynx. After being waived by the Liberty earlier in the season, she was picked by the Lynx after the injuries started to pile up. His combination of playmaking and experience have helped stabilize the team with their contributions vital in getting the Lynx back on track.

If any team in the league is capable of completely turning it around, it’s the Lynx. With three-time WNBA coach of the year Cheryl Reeve at the helm, the last two rookies of the year in Napheesa Collier and Crystal Dangerfield as well as Sylvia Fowles and Kayla McBride, the Lynx are primed for a bounce back in the second half.

Age is just a number

“Why can’t old people dream too?’

The now famous last words said by Phoenix Mercury legend Diana Taurasi in the WNBA bubble last summer, the 39-year-old is the second-oldest player in the WNBA this season. While she is currently out with a fractured sternum, Taurasi was averaging 15.8 PPG, 3.8 RPG and 3.8 APG before her injury. She is set to return Sunday against the Los Angeles Sparks.

Sue Bird, who is the WNBA’s oldest player at 40, continues to be a key piece for the reigning champion Storm. With 11.1 PPG, 3.3 RPG and 6.1 APG, she is an integral part of Seattle’s high-flying offence.

But Bird and Taurasi aren’t the only ones enjoying strong seasons. The No. 1 and No. 2 picks from the 2008 WNBA Draft, Candace Parker and Fowles, are both dominating at 35.

In her first season in Chicago, Parker is averaging 13 PPG, 8.9 RPG and 4.1 APG despite being hobbled with an ankle injury early in the season. The Sky lost seven of eight games when Parker was out and are a perfect 8-0 when she is in the lineup.

Despite Minnesota’s struggles, Fowles is averaging 16.4 PPG, 9.6 RPG and 1.5 APG. She is shooting 64 per cent from the field, the second-best mark in the league with her 2.2 steals per game the best in the WNBA. She continues to pad a stellar career, leading Reeve to dub her “the best centre in the history of our league.”

From worst to playoffs?

In a league where most teams could threaten for a playoff spot, there is one team that has made a big jump. After a busy off-season that included adding Laney, Natasha Howard and Sami Whitcomb in separate trades with Seattle to dealing Nurse and Megan Walker to Phoenix, the Liberty have gone from a team that won just two games in 2020, to a team close to .500 so far in 2021.

While Laney has been the star and Sabrina Ionescu continuing to be a big draw, it’s rookie Michaela Onyenwere that has been a pleasant surprise this season.

The sixth-overall pick this year, Onyenwere has started all of the Liberty’s 15 games so far this season, just one of three players on the roster to do so. Averaging 9.5 PPG and 2.9 RPG, Onyenwere is a leading contender for rookie of the year.

The Liberty have had their growing pains and they lead the league in turnovers per game but they have accelerated their rebuild dramatically since last season.