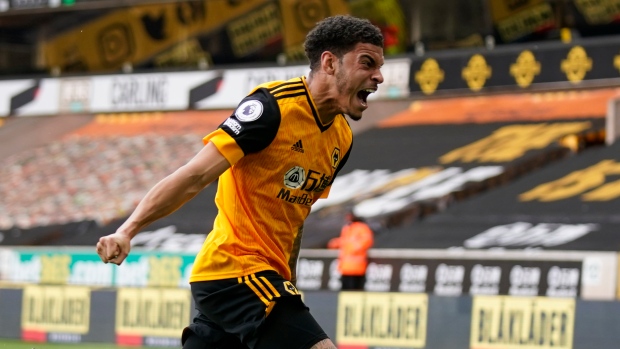 WOLVERHAMPTON, England — Morgan Gibbs-White completed Wolverhampton's late rally with a 90th-minute goal in a 2-1 win over Brighton, which had a player sent off in the second half and after the final whistle of the Premier League game on Sunday.

Moments after blazing a golden chance over the crossbar, Gibbs-White curled a shot into the top corner for his first goal of the season as Brighton was made to pay for the 53rd-minute sending-off of Lewis Dunk.

Dunk had put Brighton ahead in the 13th minute with a towering header from Pascal Gross' corner, putting the visitors on course for a victory that would have guaranteed survival in the top flight for another season.

However, the centre half's red card — for pulling back Fabio Silva as the striker ran through on goal — proved the turning point in the match.

Adama Traore came on as a substitute just after the hour mark and was a constant danger to Brighton's defence. It was the Spain winger who netted the equalizer, exchanging passes with Silva before poking a shot into the corner in the 76th.

Gibbs-White then clinched the win with a similar finish into the same corner, and frustrations boiled over after the final whistle as Brighton striker Neal Maupay got himself sent off for apparently arguing with the referee.

Brighton is 10 points clear of the relegation zone and needs one more win to ensure it stays up.