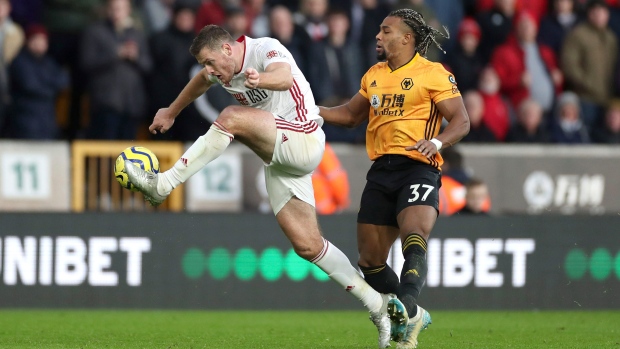 WOLVERHAMPTON, England — Wolverhampton Wanderers and Sheffield United extended unbeaten runs in the Premier League with a 1-1 draw on Sunday.

With Wolves coming off a tough Europa League game on Thursday, Sheffield looked fresher and started strongly. Lys Mousset gave Sheffield the lead after just 62 seconds off a cross from George Baldock for the French striker’s fourth goal in his last six Premier League games.

Mousset could have doubled Sheffield’s lead but saw his shot saved by Rui Patricio shortly before half time, and John Lundstram missed a good chance early in the second half.

Those misses came back to haunt Sheffield when Raul Jimenez crossed for Matt Doherty to score with a header in the 64th minute and level the game.

Wolves held on for a point when David McGoldrick missed the target for Sheffield late on.

The draw means both teams kept their impressive unbeaten runs going, but neither could overtake Tottenham for fifth place.