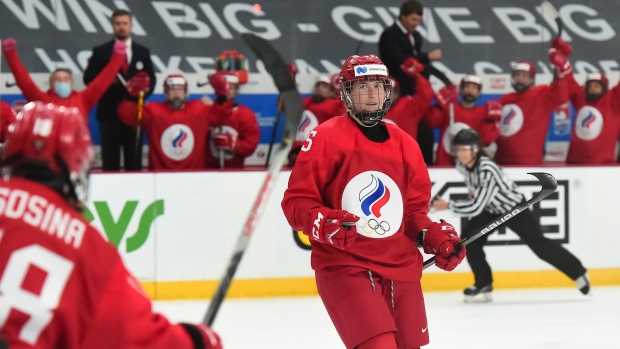 CALGARY, Alberta (AP) -- Valeria Pavlova and Viktoria Kulishova scored in 14-second span midway through the second period and Russia opened the women's world hockey championship with a 3-1 victory over Switzerland on Saturday night.

Pavlova tied it on a power play with 9:11 left in the period, and Kulishova put Russia ahead at even strength with 8:57 to go.

Maria Batalova scored in the third period, and Valeria Merkusheva made 19 saves in the Group A game.

Alina Muller opened the scoring for Switzerland in the first period, then left the game in the second because of a leg injury.

In the late game, also in Group B, Denmark faced Japan.

The tournament was last played in 2019 in Finland, with the United States winning its fifth straight title. The pandemic twice forced the cancellation of the event in Nova Scotia.

On Friday in Group A, the United States opened with a 3-0 victory over Switzerland, and Canada rallied to beat Finland 5-3. In Group B, the Cech Republic beat Denmark 6-1.

All five teams in Group A and the top three in Group B will advance to the quarterfinals.

On Sunday, the United States will face Finland.