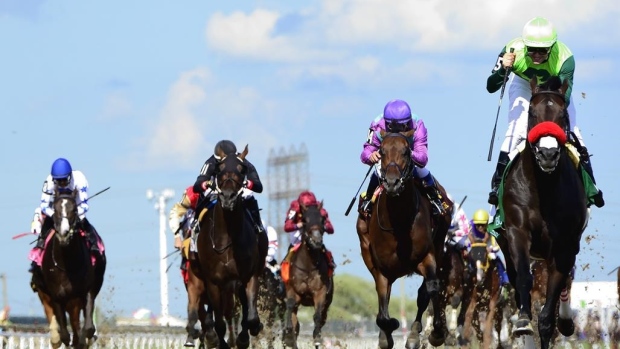 Once that happens, Lawson feels Woodbine would be a natural choice to become involved. Not not only does it have experience with single-event sports betting (in horse racing), it leases part of its facilities for the operation of casinos.

"It's good news for us for a number of reasons," said Lawson, the organization's chief executive officer. "We have a long-standing relationship with the regulator, AGCO (Alcohol and Gaming Commission of Ontario), experience in any anti-money laundering and responsible gaming and we have the infrastructure in place to drive the operations that will be key to this business."

Bill C-218 also includes protection for the horse-racing industry in Canada as it prohibits fixed-odds wagering on racing.

Currently in Canada, it's legal to bet on parlays, which are multiple wagers linked together that usually must all be correct for someone to win the bet. The successful passing of Bill C-218 would make provinces and territories responsible for regulating and licensing websites, casinos and other businesses that would allow single-game wagers.

Provincial governments pushed for single-event betting to be legalized, with estimates offshore sites, U.S. casinos and illegal bookmakers draw $14-billion US annually from this country. The overwhelming sentiment is passing Bill C-218 would allow governments to reap billions in revenue to support health care, education, addiction research and other priorities.

"Betting companies that by their nature and history want to offer horse-racing as part of their sports-betting menu are going to have to come to Woodbine Entertainment," Lawson said. "We hold the license for sports-betting on horse racing in Ontario and Bill C-218 does not permit fixed-odds wagering on horse racing so they have to do it through pari-mutuel and they will have to do it through us."

And Lawson said Woodbine also has the facilities to offer sportsbooks.

"People like to bet at sportsbooks," he said. "They like to physically attend and socialize, they like to go to a sports bar and no one is set up to do that in this province better than Woodbine Entertainment.

"A company, if it partners with us, is going to have its brand throughout the province and they have 50 ready-made sportsbooks. We have the technology, we have the cash-management, we have regulatory approvals for the locations as (pari-mutuel) wagering locations and generally, we have the most desirable locations."

Lawson added Woodbine will also have the capabilities of converting its advanced Dark Horse App and technology into a sports-betting app.

Lawson isn't the only sports executive who's positively welcoming the advent of legalize single-game sports betting.

"Single-game sports betting is a game-changer for the CFL and other professional sports," said Wade Miller, the president of the Winnipeg Blue Bombers. "It provides us an opportunity to really change our revenues in the CFL.

"There's still a lot of work to do with each province but it's definitely a step forward in the right direction."

"It should drive more sponsorship and marketing revenues to clubs," he said. "It should also putting more eyeballs and attention on the CFL."

Last month, a TSN report suggested CFL teams could receive an influx of $1.5 to $2 million each as a result of legalized sports betting.

"This isn't the windfall some are describing," said Lawson, a former chairman of the CFL's board of governors. "They (pro sports franchises) are going to earn sponsorship and exclusive dollars in terms of advertising . . . and then they have the opportunity to rent out kiosks, do other ads in the stadium and ultimately increase revenue from game broadcasts as a result of higher viewership."

Lawson said Woodbine Entertainment is in a different position than sports franchises and leagues, as it would be involved in direct operations.

"In conjunction with a partner, we plan to run the digital, we'd run the sports books and cash operations and given our current status as the only legal single-event sports betting digital operator across Canada, we are primed to play a major role in this emerging sector," he said.

"This is not something the sports teams are going to get into directly as in most cases it's illegal for them to do it under their constitutions and they are not in a position to gain regulatory status."

This report by The Canadian Press was first published June 23, 2021.