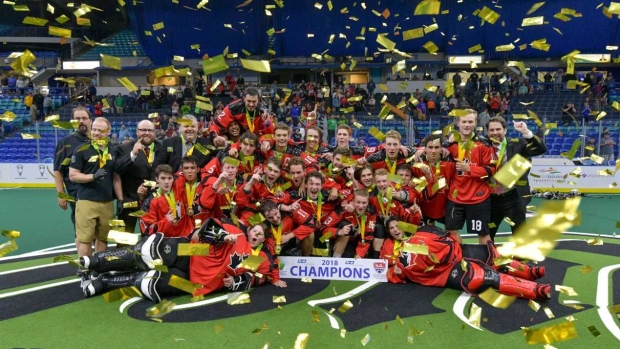 It's not how the tournament was originally envisioned, but as the world slowly emerges from the COVID-19 global pandemic the 2021 IIJL World Junior Lacrosse Championship is a great opportunity for 40 young and talented lacrosse players to engage in excellent competition for a meaningful championship.

You can catch Game 1 of the 2021 IIJL World Junior Lacrosse Championship LIVE at 9pm et/6pm pt on TSN2, the TSN app, streaming on TSN Direct and on TSN.ca.

The championship starts tonight, taking place August 12-14 at the Canada Life Centre in Winnipeg, MB with a three-game, total goals series between Canada East and Canada West featuring some of the best 21-and-under lacrosse players in the world.

Eight other nations were scheduled to take part in the tournament, but ongoing pandemic challenges and protocols necessitated a pivot. The silver lining to only having Canada East and Canada West taking part is that the World Juniors can expect to see some of the most competitive action it has seen in years.

The WJLC has limited Canada to one team as it has welcomed more nations over the last five years. An example of how competitive multiple Canadian teams can be comes from 2015, when Canada West was led by now NLL-star goalie Christian Del Bianco to a thrilling one-goal win over Canada CLax, which featured 2020 NLL first overall draft pick Jeff Teat. Given the strong rosters for both Canada East and Canada West, expectations are high for similarly tight competition.

Each team includes three players who have already been drafted by NLL teams. Canada West will be backstopped by Laine Hruska of Saskatoon, who was the 2020 Arena Lacrosse League Rookie of the Year and second team all-star goalie after he won gold medals with Canada at both the 2018 and 2019 World Juniors. He was selected in the first round of the 2020 NLL draft by the Georgia Swarm.

Hruska's creasemate in Winnipeg, Justin Geddie of Nanaimo, was the second goalie taken in that draft. He went to the Calgary Roughnecks in the second round. Geddie also has World Juniors experience, but in his case it was with Israel at the 2019 championship in Mississauga. Players are allowed to play for another team they are eligible to represent after a full calendar year has passed from the time they last represented a nation.

Patrick Dodds is a newcomer to the World Juniors, but he is no newbie to being drafted. Dodds was selected in the second round by Calgary at last year's NLL draft then was snapped up by Panther City Lacrosse Club (Fort Worth, TX) in their expansion draft this summer. Dodds is fresh off of leading the BC Junior A Lacrosse League in assists and points, playing this season for his hometown Victoria Shamrocks.

One of Canada East's goalies will be competing against Geddie at the World Juniors and then battling for a spot with the Calgary Roughnecks when NLL camps open this fall. Fergus, Ontario native Landon Kells had quite a year in 2019. One year after leading the Elora Mohawks to the 2018 Founders Cup championship, Kells helped Canada win gold at the World Juniors, joined the Peterborough Sr A Lakers as they won the Mann Cup, then was picked by Calgary in the third round of the NLL draft.

Ethan Riggs of Dundas, Ontario won gold with Canada at World Juniors in 2018 in Saskatoon and just kept rising in the game, to the point he was a first-round pick of the Halifax Thunderbirds at the 2020 NLL draft. He'll anchor the Canada East defence.

Much like most of these players, Orangeville, Ontario's Tanner Buck is no stranger to winning. He captured a Founders Cup title in 2017 with the Jr Orangeville Northmen, was named to the all-world team while leading Canada to World Juniors gold in 2018, then won a Minto Cup with the Jr A Northmen in 2019. In 2020, he was named to the second all-star team in the Arena Lacrosse League as a member of the Toronto Monarchs.