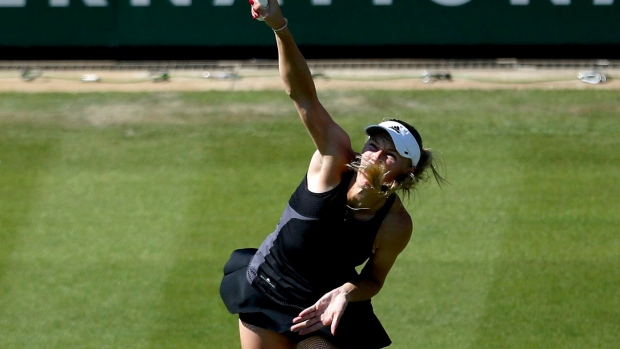 EASTBOURNE, England — Andy Murray remains well below his best with Wimbledon less than a week away and the former champion has still to decide whether to bid for a third title at the All England Club.

The 31-year-old Scot lost 6-4, 6-4 to second-seeded Kyle Edmund in an all-British clash in the second round of the Eastbourne International on Wednesday as he continued his comeback from injury.

Asked if he would know by the time the draw was made on Friday morning whether he would play at Wimbledon, Murray replied: "Yeah, probably. I'll chat with my team in the next couple of days.

"I'll see how I pull up again. I don't really anticipate any issues. With each match I'm trying to gain information about where I'm at physically and where my game is at."

Murray's defeat was his second in three matches since his return from long-term hip problems that sidelined him for almost a year.

"There is no risk with me playing tennis just now. It's just whether I feel I'm able to do myself justice," Murray said. "Two weeks ago I practised with Kyle and I didn't win a game. So I have made decent improvements the last couple of weeks.

"I want to be able to compete properly. If I don't feel like I can do that, then I won't play."

The 23-year-old Edmund took over as Britain's No. 1 while Murray was injured and the victory was his first against his "idol".

"Beating Andy is a bit strange, he's always been my idol, and I've got to know him well over the years," Edmund said. "He's always given me advice and I've looked up to him."

Top-seeded Diego Schwartzman was upset by Lukas Lacko, who triumphed 6-4, 4-6, 7-5 to claim the biggest win of his career.

Other seeds to crash out were Steve Johnson of the United States and Argentine Leonardo Mayer.

Konta had not dropped a set against Wozniacki in their two previous meetings at the 2017 Australian Open and the final of last year's Miami Open.

Konta broke the world No. 2 in the opening game before the British No. 1 responded to dropping her own serve by breaking again to go 4-3 up and eventually taking the set.

But Wozniacki responded impressively by racing through the next two sets and sealed victory with an ace on her second match point. The Danish player next faces eighth-seeded Ashleigh Barty.

The defending champion next plays Aryna Sabalenka after the Belarusian beat Elise Mertens.

Fourth-seeded Angelique Kerber of Germany beat Danielle Collins of the United States 6-1, 6-1 to set up a quarterfinal meeting against seventh-seeded Russian Daria Kasatkina.

Third-seeded Petra Kvitova pulled out with a hamstring injury before her third-round match against Agnieszka Radwanska.