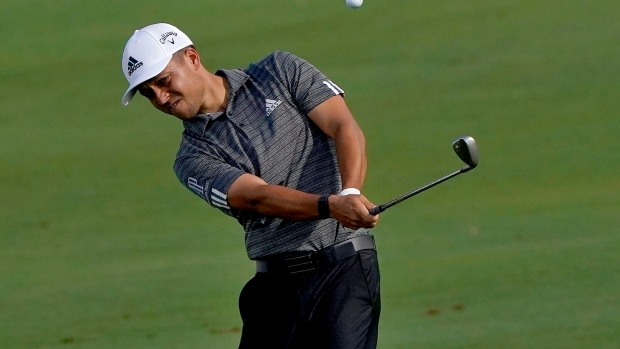 KAPALUA, Hawaii — Xander Schauffele made his first bogey in 60 holes at Kapalua dating to his victory last year. He didn't feel as though he did anything special Saturday in the Sentry Tournament of Champions.

As it turned out, he didn't have to.

Schauffele overcame a pair of bogeys that cost him the lead with consecutive birdies on the back nine and, more importantly, no mistakes over the final hour. It was good enough for a 2-under 71 that allowed him to keep a one-shot lead over Justin Thomas going into the final round.

“I was 2 under, then back to even, then finished at 2 under. Overall, nothing to be too upset about,” Schauffele said as he tries to become the first player in 10 years to win back-to-back against this winners-only field on Maui.

Thomas, going for his third victory in his last seven starts on the PGA Tour, felt differently.

Never mind that he endured another day of strong gusts and rain that showed up and left without warning. Or that he made five birdies on the front nine and shot 69.

Thomas missed a pair of 6-foot par putts because he guessed wrong while trying to guess how much the wind would affect slope and grain. He normally thrives on the back nine of the Plantation Course, and on this day shot 38.

He was in the final group. He just knows what could have been.

“I felt like I really let a good one get away from me," Thomas said.

Even so, it set up a compelling finish for the first tournament of the year. Schauffele is No. 9 in the world with a passion for winning that doesn't always come through in his sly smile and easy gait. Thomas is No. 4 in the world who has never been too far from the lead the last six months.

“We just both hate losing, pretty plain and simple," Schauffele said. “He talks openly about how he hates to lose. I don't know anyone else more competitive than I am. He's probably argue the same way. We both want it, and fortunately we're pretty good friends and we're familiar with each other and we know each other's games. We both have enough firepower to make some moves here and there.”

But it's not that simple.

“It's going to be what the course is willing to give when it's blowing 25 mph,” Schauffele said.

And it's not just them.

Schauffele was at 11-under 208, the highest 54-hole score to lead at Kapalua since Vijay Singh was at 11 under in 2007. Nine players were within four shots of the lead.

Schauffele came from five shots behind last year when he closed with a 62 to beat Gary Woodland by one. Woodland shot a 69 on Saturday and was three shots behind.

The group at 7-under 212 included Jon Rahm, Kevin Kisner and Patrick Reed, along with a quartet of first-timers at Kaplaua — Joaquin Niemann, Matt Wolff, Collin Morikawa and J.T. Poston.

Patrick Cantlay ran off three straight birdies to get into the mix, only to hit a tee shot out-of-bounds on the 14th and hit another tee shot into the waist-high weeds on the 18th, leading to bogey. He shot 39 on the back for a 73 and fell five shots behind.

Niemann, who opened with a 66 on Thursday, failed to birdie the two par 5s and made bogeys on the two par 4s between them. He shot 39 on the back and had to settle for a 74, leaving him four shots behind.

Reed had a 74, eight shots worse than his round Friday, and he was in the group four shots behind.

The only Canadian in the field, Corey Conners of Listowel, Ont., carded a 1-over 74 on Saturday. He dropped to 21st and sits nine shots back of the leader Schauffele.

Saturday brought another dose of gusts in the 25 mph range, and occasional rain that showed up out of nowhere.

Schauffele was at even par through 13 holes — two early birdies, a long three-putt bogey and a bogey from the bunker on the par-3 11th — and briefly fell out of lead.

Thomas figured he was in a tough day at the start when dark clouds zoomed over the west tip of Maui and sent showers. Thomas jogged up the concrete toward the clubhouse to get more rain gear, rolling his eyes as he said sardonically, “Sweet.”

His golf was every bit of that. He stuffed a wedge on the opening hole for birdie. he ran off three straight birdies with two shots into 4 feet and a two-putt birdie. He finished the back nine with a 10-foot birdie putt.

It looked as though everything were going his way on the 12th when he pulled his tee shot. It landed in a bunker, bounced out and was headed for thick native grass when it struck a volunteer in the leg and caromed into play. But his wedge just crawled onto the green, and with a back pin, he three-putted.

Schauffele didn't make a mistake after the 11th and returned to the lead. Now it's about finishing, and even without a 62 by someone chasing him, it might not be easy.