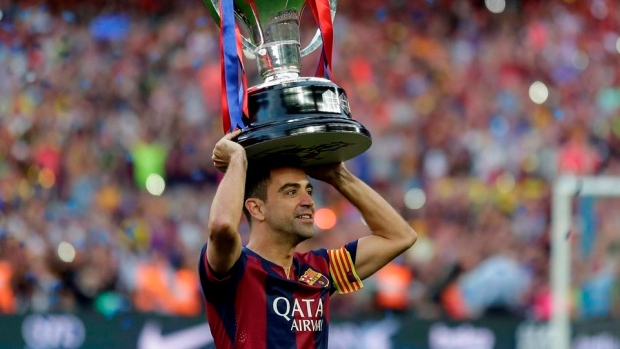 BARCELONA, Spain — Barcelona coach Ernesto Valverde’s job appears in serious doubt after his club met with Xavi Hernández amid growing speculation that its former midfield great could become its next coach.

Those rumours were stoked to fever pitch when Qatari club Al-Sadd - where Xavi coaches - said that Barcelona was “negotiating” with him.

"There are negotiations between Xavi and Barcelona now and we wish him success wherever he decides to go," Al-Sadd's sports director Muhammad Ghulam Al Balushi told Qatari television broadcaster Alkass.

Xavi said he had met with Barcelona sports director Eric Abidal on Friday in Doha but did not reveal the nature of the meeting. He added that he is committed to coaching Al-Sadd for now.

“I don’t hide my dream of coaching Barcelona one day, I would love to coach the team. I support them and my dream is to train Barcelona, but now my focus is on Al-Sadd,” Xavi said Saturday after his side’s 4-1 win over Al-Rayyan in the Qatar Cup semifinals.

“Eric Abidal is my friend. Out of respect for Barcelona and Al-Sadd, my focus is on the next match against Al-Duhail,” he said. “I cannot speak on this issue and the conversation was on many issues with Abidal.”

Barcelona has made no public comment on the meeting.

The 39-year-old Xavi left Barcelona for Al-Sadd in 2015, following 17 trophy-laden seasons. A World Cup winner with Spain, he is one of the club's all-time greats and has long been seen as a future coach at Camp Nou.

But most fans expected that day to be far away and for Xavi to perhaps follow the path of former Barcelona players Pep Guardiola and Luis Enrique, who returned as coaches of its reserve side to gain experience before eventually making the leap to its star-studded senior team.

Xavi, however, is not the only possible replacement being touted by local media. Barcelona-based sports daily Mundo Deportivo said that reserve team Javier García Pimienta could be promoted as a snap replacement. Netherlands manager and former Barcelona star Ronald Koeman has for several years been considered another strong candidate.

Valverde is under intense pressure after his team conceded two late goals to Atlético Madrid in a 3-2 loss in the Spanish Super Cup semifinals on Thursday. The loss added to the perception many supporters have that Valverde’s side throws away leads against important rivals, tarnishing his otherwise strong record that includes back-to-back Spanish league titles.

Barcelona has been eliminated from the Champions League in the last two seasons after squandering big first-leg leads in second legs on the road. It was humiliated 4-0 at Liverpool after winning the first leg of the semifinals 3-0. Valverde’s job was in even more jeopardy at the end of last season after league champion Barcelona lost the Copa del Rey final to Valencia.

Club president Josep Bartomeu, however, has stuck by him until now at least. Star forward Lionel Messi publicly supported Valverde following the loss to Atlético. Barcelona has advanced to the round of 16 in this season's Champions League and leads the Spanish league on goal difference ahead of Real Madrid, but it has drawn three of its last four matches.

Valverde received the backing of predecessors Guardiola and Luis Enrique on Sunday.

“Barcelona is a special place because winning the league is not enough,” Manchester City coach Guardiola said. “I am sorry for Ernesto Valverde. He does not deserve this. I hope this situation can be resolved soon.”

Luis Enrique, who coaches Spain’s national side, said “I empathize with Valverde because I like him a lot.

“He is a leader of a title-winner and he is one of the best coaches in Spain.”

Barcelona received a blow on Sunday when striker Luis Suárez was ruled out for four months after having surgery on his injured right knee.