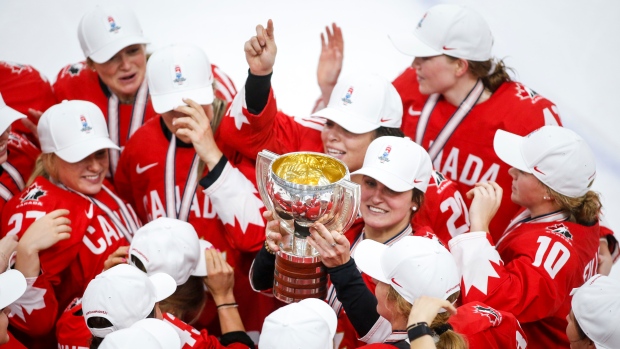 When Canadian captain Marie-Philip Poulin went top shelf glove side on American goaltender Nicole Hensley in overtime of the gold-medal game at the 2021 IIHF Women’s World Championship, she immediately knew it was a goal.

While the goal confirmation was delayed and play continued despite Poulin throwing her arms in the air, eventually the final buzzer sounded.

What followed was a fiercely jubilant celebration as joyous screams echoed throughout a mostly empty WinSport Arena in Calgary with only the players’ families and friends watching on and forward Blayre Turnbull breaking her leg in the player pileup in front of the Canadian goal.

Ahead of the tournament, like many other Canadians on Aug. 6, the women’s hockey team gathered to watch their soccer counterparts win the country’s first-ever Olympic gold medal in women’s soccer at the Tokyo Games.

From their historic win over the United States in the semifinal, to the nail-biting gold-medal match against Sweden that went to deciding penalty kicks, the Canadian women’s soccer team had one mantra in mind in Tokyo after two straight Olympic bronze medals in 2012 and 2016.

“Change the colour of the medal.”

That motto easily applied to the women’s hockey team in 2021 as they spent the last two years with a bitter taste in their mouths after a disappointing showing in Helsinki in 2019.

In what was another ‘Golden Goal’ moment for Poulin, it was her first gold medal as captain of the senior national team and after missing most of the 2019 tournament with a knee injury, her return to form was a reminder that she is the best female hockey player on the planet.

Poulin’s goal also lifted a giant weight off a program that hadn’t won gold at the Women’s Worlds since 2012, losing to the United States in the final four years in a row with the low point being the unprecedented bronze medal in 2019 after a loss to host Finland in the semifinals.

One of the most notable aspects about this Canadian team was the integration of younger players into the existing core of veterans. While Poulin, Mélodie Daoust, Natalie Spooner, Brianne Jenner, Jocelyne Larocque and Renata Fast were predictably strong for Canada, the youngsters made it clear they are part of the present and future for the program.

Throughout the tournament, 21-year-old Sarah Fillier demonstrated that she has the ability to be the best forward Canada has produced since Poulin. With three goals and six points playing on a line with Daoust and Spooner, Fillier cemented herself as a rising star.

On the blueline, Canada had four defenders who were 23 or younger. Claire Thompson (23), Ella Shelton (23) and Ashton Bell (21) all made their tournament debuts while 22-year-old Jaime Bourbonnais played in her second. Thompson established herself as a top-four piece playing with Erin Ambrose while the others carved out important roles.

In goal, Ann-Renée Desbiens was the primary starter but backup Emerance Maschmeyer showed in her appearances that she is more than capable of stepping up to play in important games.

Throughout the tournament, Canada did not lose a single game. They stumbled briefly in the opening game, going down 2-0 to Finland in the first period before rallying to a 5-3 victory.

More importantly, they beat the Americans twice when it mattered. In the final game of the round robin, Canada thumped the United States 5-1 to break an eight-game losing streak at the Worlds against them and did it without Poulin, who missed the game with an injury.

In the gold-medal game, the Americans took an early 2-0 lead before Jenner and Jamie Lee Rattray responded and Desbiens held the fort in goal to set the stage for Poulin’s dramatic overtime winner.

Since the tournament wrapped up at the end of August, the team has to continue to prepare with games against Canada’s National Women’s Development Team, Alberta Junior Hockey League squads, the Professional Women’s Hockey Players Association, Finland and the United States.

Now for the first time since 2001, Canada goes into an Olympic year as the reigning Women’s Worlds champions, giving them positive momentum heading into Beijing as they look for a better ending than 2018 when they lost in a heartbreaking shootout to the Americans in the gold-medal game.

That win by the United States broke Canada’s streak of four consecutive Olympic gold medals. On a bigger scale, that Olympic title officially crowned the United States as the best in women’s hockey after years of winning the Women’s Worlds but coming in second at the Games.

Canada has waited nearly four long years to avenge that loss in Pyeongchang, South Korea, and the chance to regain the title as the best in the world. They delivered at the Women’s Worlds in Calgary. Don’t be surprised if Poulin has another ‘Golden Goal’ in her in Beijing.