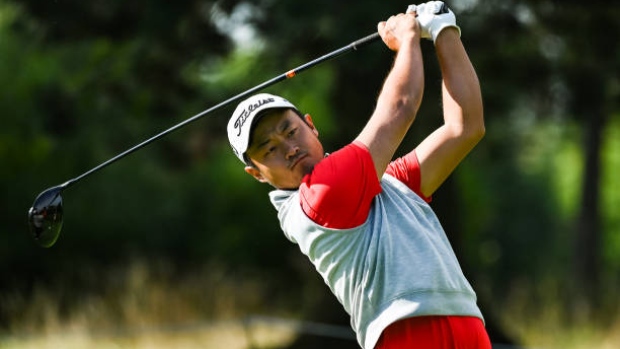 VICTORIA, British Columbia—Consistency is paying off for Yi Cao at the Royal Beach Victoria Open presented by Times Colonist. One of four players in the field from China, Cao shot a 5-under 65 for the second consecutive day to take a one-stroke lead after two rounds of the PGA TOUR Canada’s first official tournament since 2019.

Cao reached 10-under Friday by surrounding a double bogey on No. 11 with birdies on the 10th, 12th and 13th holes. He finished the round with seven birdies.

“I had a pretty solid day, especially compared to [Thursday]. I made some short putts. I hit it close. There was nothing really dramatic,” Cao said of his second tour around Uplands. Cao described a workmanlike first two days and was hard pressed to find anything spectacular in his play outside of a birdie on the par-3 fifth in his opening round. “I chipped in from the back of the green (for birdie). That’s probably the only special one,” he added.

Joey Savoie of Quebec is just one shot behind Cao. An eagle on No. 10 set the tone for a 30 on the back nine. The success led to a 66 for the round, putting him in second place, at 9-under, entering the final two days of play.

“I’m really pleased with that,” said Savoie, who added the importance of staying fresh and healthy over the weekend. “So, if I get some good rest, ultimately it’s just playing golf and hitting fairways and greens. So, the game doesn’t change. I’m glad I’m in that position.” The Saint Leo University alum noted that it’s something he’s going to cherish.

Eric Lilleboe moved his way back into contention by firing a tournament-low score of 62. The American made nine birdies en route to improving to 8-under at the midway mark. He noted that his “birdie barrage” began after taking a big risk on No.12, coming up short on a 30-yard cut shot. But things worked out for the 34-year-old from Michigan. Lilleboe made a birdie on the par-5 hole to bounce back from a bogey on No. 11.

“I’m going to go back and relax and then I’m going to get a little workout in,” Lilleboe said after his exceptional second-round. “And maybe come back tonight and hit some putts, just to kill time so I don’t get too bored. And maybe hit a few golf balls.”

Wil Bateman of Edmonton is also at 8-under after rounds of 67 and 65. The latter came on a day where Mother Nature played a role.

“It was raining pretty hard on the range, but I just tried to stay patient, and the weather got great on the back nine. (We) had a little fog come through the valley there, and it was fun,” said Bateman, who is in a third-place tie with Lilleboe, Canadian Michael Blair and Americans Joe Fryer, Gavin Hall, Davis Shore and Scott Stevens.