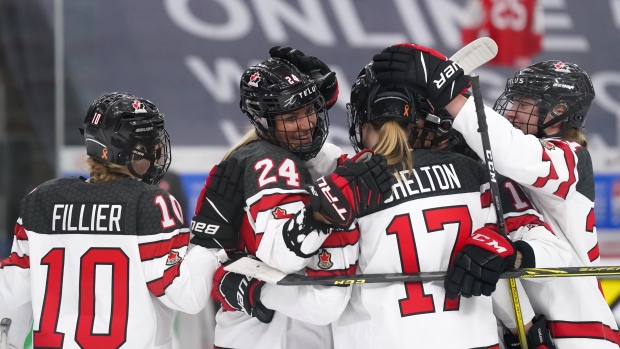 This year’s Canadian contingent at the Women’s World Hockey Championship was a changing of the guard as they attempted to bring home their first gold medal in nearly a decade.

Three games into the tournament in Calgary, however, the veterans that have remained are making a major impact.

Canada is undefeated and has outscored opponents 15-4 and outshot them 169-30.

After starting slowly and falling behind 2-0 less than seven minutes into the opener versus Finland, 28-year-old Jamie Lee Rattray opened the scoring for the hosts which sparked a comeback over the 2019 silver medalists. Melodie Daoust and Natalie Spooner, who have a combined eight World Championship medals, are tied for the scoring lead with Czech forward Alena Mills. Erin Ambrose, another player who has competed at multiple World Championships, is pacing all blueliners with four points.

Not to be outdone, that contingent of eight newcomers has also made their presence felt and contributed to Canada’s perfect start.

Twenty-one-year-olds Ella Shelton and Sarah Fillier each scored in Canada’s 5-1 win over the Russian Olympic Committee on Sunday, with Shelton potting the winner.

“I think going back into the locker room after every period there are a lot of good leaders to lean on and look for advice and look for the extra pump to get you through the next period,” Shelton said on Sunday.

According to Canada head coach Troy Ryan, team chemistry is often underrated and unseen, but can go a long way.

“I think the part of the equation that others might not be aware of would be the leadership and veteran players on the team,” he said after Sunday’s win.

“How they’ve embraced the young players, they’ve made them feel comfortable from the first time they’ve been with our group, and that kind of mentality is contagious. When you start feeling good with the people you’re around, you can play a little bit looser and with more confidence. The young players deserve a lot of credit, but the veteran players equally deserve credit for the environment they’ve created with this group.”

That veteran group is likely telling the younger players to savour the moment and enjoy getting to play meaningful games after a two-year hiatus in international women’s hockey. Following multiple tournament postponements, competing in Calgary is an opportunity none of them are taking for granted.

“Just standing on the blue line and watching the opening video when they said the world championship is open, to be honest it gave me shivers,” captain Marie-Philip Poulin said after the tournament-opening win.

“We have been waiting for that moment for a long time. We’re very excited; it was not the start we wanted, but we responded well. It was true adversity and it showed that this team is resilient and we can go through anything. It’s hard to put into words, but putting on the jersey for an international game was very special.”

Canada hosts the United States in their final game of group play on Thursday at 6 pm EST on TSN 1.