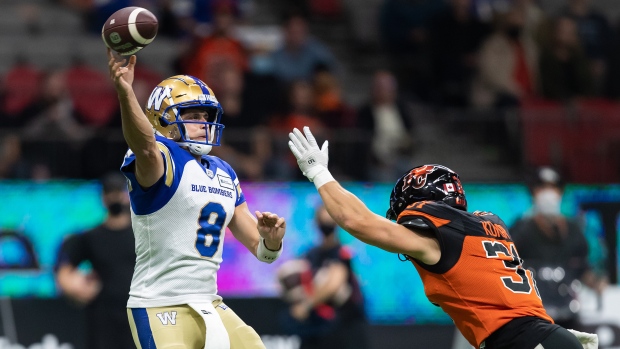 VANCOUVER — Zach Collaros threw for a monstrous 417 yards Friday and led the Winnipeg Blue Bombers to a dominant 30-9 win over the B.C. Lions in Vancouver.

The Bombers quarterback connected on 28-of-33 passes, including touchdown throws to Kenny Lawler and Rasheed Bailey in the second quarter.

Kicker Ali Mourtada contributed a trio of converts and three field goals for Winnipeg (7-1), which won a fourth game in a row and is firmly entrenched at the top of the CFL standings

Lions rookie Nathan Rourke replaced Reilly late in the fourth quarter. He threw 55 yards in relief and was sacked once.

The Lions (4-4) relied on Jimmy Camacho for offence as the kicker was good on all three field-goal attempts, including a 49- yarder.

B.C. has lost two in a row and is 1-4 against West Division opponents.

The Lions showed signs of life when Rourke entered the game late in the fourth quarter.

The 23-year-old from Victoria marched the offence downfield with a series of mid-range passes before Winnipeg's Mike Jones intercepted Rourke's long lob into the end zone.

The Bombers dominated in the air and on the ground. Andrew Harris totalled 81 yards on 14 carries. Lawler recorded 12 receptions for 205 yards.

A combination of passes and rushes got Winnipeg over the goal line late in the fourth quarter.

Sean McGuire capped the 10-play, 81-yard drive, by smuggling the ball into the end zone for his league-leading seventh touchdown of the season.

Mourtada kicked the convert to give the Bombers a 21-point lead.

The two sides traded field goals through much of the second half, including Mourtada's 23-yard boot early in the final frame.

The play put the Lions in decent position, but Reilly and his side couldn't break through the Winnipeg defence and settled for yet another three-pointer.

Camacho's 43-yard kick bounced off the right upright for his third of the night.

Mourtada padded the Bomber's lead with a 29-yard field goal earlier in the quarter, putting the visitors up 20-6.

Camacho had cut the deficit to 17-6 just before the half with a 49-yard field goal.

Winnipeg took a double-digit lead on a 104-yard, nine-play scoring drive late in the second quarter.

Lawler caught a 44-yard throw from Collaros and had a chance to dash deeper into Lions' territory, but Lawler slipped on the turf before he was tackled by Gary Peters.

But moments later, Collaros sailed a crisp 10-yard pass to a wide-open Bailey in the end zone.

Earlier in the quarter, the Bombers' QB connected with Lawler on a 20-yard pass that put Winnipeg on B.C.'s 27-yard line.

Collaros then sent an arching 27-yard lob across the field to Lawler in the end zone. Lawler made the catch despite Lions' defensive back Bejour Wilson draped on him.

Each side capped drives with 13-yard field goals in the first quarter.

The Blue Bombers are at home Oct. 8 to the Edmonton Elks. The Lions have a bye week before returning to action Oct. 16 against the visiting Calgary Stampeders.

NOTES: Winnipeg's Jackson Jeffcoat and Willie Jefferson each recorded a sack. They each have six this season, which ties Calgary's Shawn Lemon for the second-most in the league. ... B.C.'s Bryan Burnham has gone 90 consecutive games with a catch.

This report by The Canadian Press was first published Oct. 1, 2021.