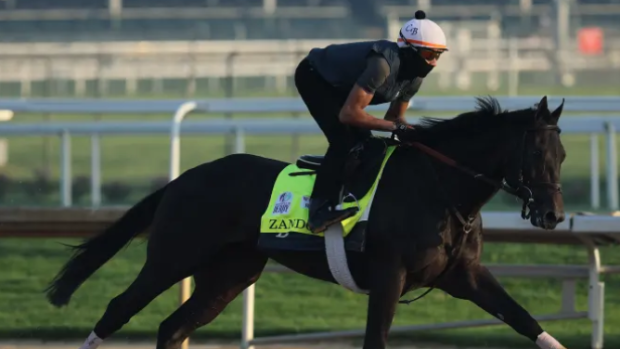 LOUISVILLE, Ky. (AP) — Zandon and filly Nest are the morning-line favorites for the 148th Kentucky Derby and Kentucky Oaks, respectively, at Churchill Downs, which will host both marquee races at full capacity for the first time since 2019.

Watch the race LIVE this Saturday with coverage beginning LIVE on TSN4, TSN.ca, the TSN App and on TSN Direct at 4pm et/1pm pt.

Zandon, trained by Chad Brown, drew 3-1 odds Monday and will start from the No. 10 post among 20 horses for the $3 million marquee event for 3-year-olds. The colt moved to second in Derby points behind Epicenter after rallying from the back of the field to win last month’s Blue Grass at Keeneland in Lexington. He has two wins, a second-place finish and a third in four career starts.

Zandon has the “perfect” spot dead center with Flavien Prat aboard, Brown said.

Epicenter was initially expected to be the Derby favorite following consecutive graded stakes wins, including the Louisiana Derby in March. The horse is the 7-2 second betting choice after drawing the No. 3 post.

Messier, one of two colts trained by Derby first-timer Tim Yakteen after he took over their training this spring for suspended Hall of Famer Bob Baffert, is the 8-1 third choice and will start from the No. 6 post.

Yakteen’s other entrant, Santa Anita Derby winner Taiba, is a 12-1 choice from the No. 12 post.

“They made us wait,” said Yakteen, referring to his horses being among the final three chosen. “But in the end, we drew well.”

Hall of Fame trainer Steve Asmussen simply hoped that Epicenter could break well from near the rail beneath jockey Joel Rosario and see where it leads.

“How long he stands in there, how long it takes to load, 150,000 people staring at him – it’s a lot,” Asmussen said. “Joel is very confident in rhythm of the horse. So, if he is away cleanly Joel will let him be who he is.”

Meanwhile, four-time Derby-winning trainer D. Wayne Lukas gets another chance for a fifth victory with Ethereal Road, who entered the field on Monday after Un Ojo withdrew. The Hall of Famer’s 50th Derby starter and first since Bravazo (sixth in 2018) has work to do as a 30-1 long shot from the No. 20 far post.

Nest is coming off a dominant 8 1/4-length victory over Cocktail Moments in the Ashland Stakes at Keeneland, her third in a row and second this year.

“I’m happy with the draws for Nest and Goddess of Fire,” said Pletcher, who is seeking his second consecutive Oaks win and fourth overall.

“We were hoping to be somewhere in the middle,” Pletcher said. “With Shahama, it’s OK. She isn’t real sharp away from the gate, so she may have a better chance out there than if she was stuck down inside.”

The Kentucky Derby field with jockey and odds from the rail out:

The Kentucky Oaks field with jockey and odds from the rail out: