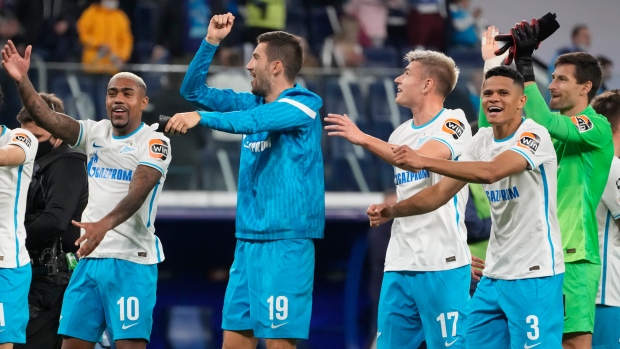 ST. PETERSBURG, Russia (AP) — Zenit St. Petersburg cruised to a 4-0 win over 10-man Malmo in the Champions League on Wednesday to stay in contention to advance from a group also containing Juventus and Chelsea.

Three Brazilians combined to give Zenit the lead in the ninth minute as Malcom played in Douglas Santos on the left and he hit a low cross for Claudinho to knock past goalkeeper Johan Dahlin.

The Swedish champion had chances to level when captain Anders Christiansen missed with a header and later a mistimed scoop over the bar. Shortly after the break, the game was all but over with Zenit’s second goal and a red card for Malmo.

First, Daler Kuzyaev headed in for Zenit off a cross from defender Yaroslav Rakitskiy in the 49th. Four minutes later, Malmo defender Anel Ahmedhodzic was red-carded after the referee decided, with help from a video review, that his handball in a challenge on Kuzyaev had denied an obvious goalscoring opportunity.

Wide midfielder Alexei Sutormin added a third in the 80th with a low shot from long range. Wendel extended the lead to 4-0 with a goal on the rebound in stoppage time after Dahlin parried a shot from substitute Sardar Azmoun.

After Zenit lost its opening game at Chelsea and Malmo was beaten by Juventus, the result in Russia on Wednesday is most likely to affect third place in Group H and a spot in the Europa League knockout stages, unless Zenit or Malmo can manage some surprise wins later in the campaign. Juventus hosts Chelsea in the late game in the group Wednesday.