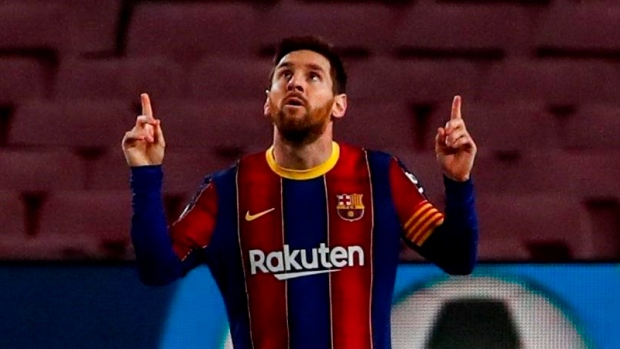 The star status of the Barcelona forward, whose contract expires this summer, has been built on numerous titles and scoring records, as well as his exploits in one of soccer’s top rivalries.

But not even Real coach Zinedine Zidane wants Saturday to be Messi’s last chance to torment Madrid.

“I don’t want this to be the last ‘clásico’ for Messi,” Zidane said on Friday. “Hopefully he stays at Barcelona. He’s good there and it’s also good for the Spanish league. We know how good a player he is.”

Messi, who turns 34 in June, was frustrated in his attempt to leave Barcelona last summer. He said in December that he will decide his future when his season is over and he can walk away for free if he wants. Since then, Joan Laporta has returned to power as the club's president with the goal of convincing Messi to sign another contract, but the player remains silent.

Messi has scored in a “clásico” a record 26 times starting when he netted his first hat trick for Barcelona at age 19 in a 3-3 draw with Real in 2007.

For a decade, the six-time Ballon d’Or winner fed on his personal rivalry with Cristiano Ronaldo, with both stars exchanging goals and stellar performances to lead their sides.

But since Ronaldo left for Juventus in 2018, Messi has failed to score in six consecutive matches against Madrid.

Barcelona coach Ronald Koeman hopes that Messi can end that drought and deliver a victory that would lift his team into first place before current leader Atlético Madrid visits Real Betis on Sunday. After this weekend, there will be eight rounds left in the season.

“I hope that Messi can prove decisive because we need him to play at his best and for Barça to also show its best version,” Koeman said. “For our attack, our passing game, and to create scoring chances, we need Leo.”

Messi leads the league with 23 goals this season. After a shaky start under Koeman, Barcelona has found its stride and is undefeated in 19 straight rounds, including a run of nine consecutive wins on the road in the league.

While defenders Gerard Pique and Sergi Roberto recovered from injuries in time to make Barcelona’s squad list, Messi will face a Madrid defence that is missing its two starting centerbacks.

Sergio Ramos is out with a leg injury, while Raphael Varane is isolating after he tested positive for the coronavirus. In their place, Zidane could play Nacho Fernández and Éder Militão, who filled in well on Tuesday in a 3-1 win over Liverpool in a Champions League first-leg quarterfinal.

“Ramos and Varane are important defenders, and one (Ramos) is their captain and gives them leadership on the field, but they showed against Liverpool that they have other players who can step in,” Koeman said.

For Karim Benzema, who leads Madrid with 18 goals in the league, the key will be which high-powered team can dominate possession and apply the most effective pressure without it.

“When we press, we have to go all out,” the French striker said. “And when we have the ball, we have to develop good possessions, because they don’t like chasing the ball.”

Madrid, the defending league champion, comes into the match at its Alfredo Di Stéfano Stadium in third place, three points behind Atlético and two points adrift of Barcelona.

“We will go on the field aiming to win because for us this is a final,” Benzema said.