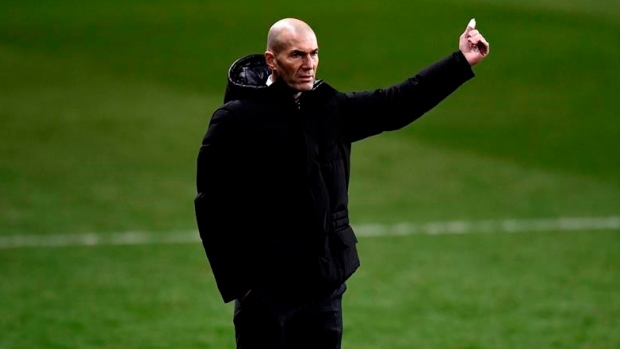 BARCELONA, Spain — Amid the uproar caused by the derailed Super League, Real Madrid coach Zinedine Zidane is trying to keep his team on track for two major titles.

One of them is the Champions League where Madrid hosts Chelsea in the first leg of the semifinals on Tuesday.

Among possible punishments for clubs like Madrid which are yet to reject the Super League plan, UEFA President Aleksander Ceferin has warned of a potential future ban from UEFA's European competitions.

Eight of the 12 Super League clubs have since officially backed out of the controversial project, but Madrid president Florentino Pérez insists the Super League is on “standby” despite the lack of wider support.

Madrid is in contention for the Spanish league title and still able to add to its 13 European Cups this campaign, at least.

And for Zidane, talk of Champions League bans is being dismissed as an “absurd subject."

“I can only say that we are going to prepare to play the Champions League semifinals,” he said.

Before hosting Chelsea, Madrid has a match in the tight Spanish title race.

Barcelona is only two points behind Madrid in third place, and Lionel Messi’s side has one more game to play than its two title rivals.

Atlético visits Athletic Bilbao on Sunday, when Barcelona is at Villarreal.

The match against Betis will be the second that Madrid has played since the storm caused by the Super League announcement last weekend.

Zidane said he was not bothered by the T-shirts condemning the Super League that Cádiz’s players wore before their match on Wednesday. Madrid won 3-0.

“Everyone is free to say what they want,” Zidane said.

Against Betis, Zidane will be without centre back Sergio Ramos, wing back Ferland Mendy, and midfielder Toni Kroos because of injury. Luka Modric and Eden Hazard, however, are back in the squad after recovering from injury.

Coached by former Madrid manager Manuel Pellegrini, Betis has risen to sixth place with only one loss in its last 10 games.

Betis will be without forward Nabil Fekir, who is serving a one-game suspension, and winger Cristián Tello, out with a knock.

Pellegrini is not counting on Madrid being affected by all the distractions off the field.

“The issue of the Super League has absolutely nothing to do with tomorrow’s game, which is in the Spanish league. The issue of the Super League is over,” Pellegrini said. “They are fighting with Atlético for the lead of the Spanish league and will play Chelsea on Tuesday in the Champions League, but I don’t think that will be a distraction for them when it comes to winning the three points on Saturday."