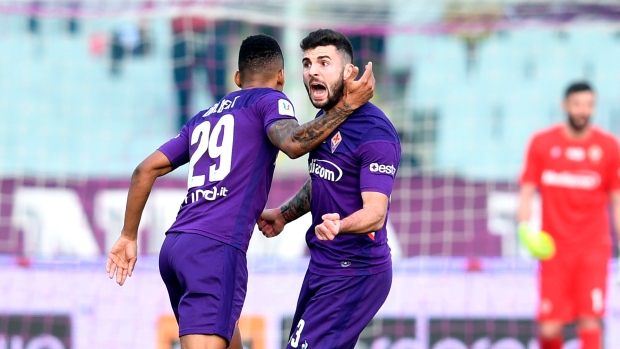 Juventus, which has won the trophy a record 13 times — including four of the past five editions, will face either Roma or Parma.

The Bianconeri made a number of changes with Cristiano Ronaldo out with illness and Merih Demiral injured.

Dybala and Gonzalo Higuaín combined for the opening goal in the 16th minute, exchanging a series of passes before Higuaín finished it off.

Dybala got on the scoresheet himself 10 minutes later with a powerful penalty after Udinese goalkeeper Nicolas had tripped Federico Bernardeschi.

Higuaín thought he had doubled his tally early in the second half but it was ruled out for offside after a video review.

Instead it was Dybala who got his second minutes later with a shot into the top left corner.

Douglas Costa converted another penalty in the 61st following a handball from Udinese defender Bram Nuytinck.

Pol Lirola’s late goal gave 10-man Fiorentina a 2-1 win over Atalanta and a place in the quarterfinals against Inter Milan.

Patrick Cutrone had given Fiorentina an early lead with his first goal since joining the club from Wolverhampton Wanderers last week.

Atalanta twice hit the crossbar before Josip Ilicic levelled in the 67th minute. And it seemed as if the match had turned three minutes later when Fiorentina defender Germán Pezzella was shown a second yellow card, for diving, and sent off.

However, the home side managed to find a winner despite being a man down, sparking celebrations on the Fiorentina bench.

Krzysztof Piatek scored one and set up another as AC Milan beat Spal 3-0 to set up a quarterfinal against Torino.

Zlatan Ibrahimovic was left on the bench and Piatek took full advantage.

The Poland forward drilled home a through-ball from Ismaël Bennacer in the 20th minute and then turned provider for Samu Castillejo to curl a delightful effort into the top right corner, on the stroke of halftime.

Theo Hernández sealed the result in the 66th.

Spal thought it had been given a chance to score a consolation goal late on when it was awarded a penalty after Lucas Paqueta slid in for a tackle and blocked a shot with his elbow. But the referee reversed his decision after a video review.