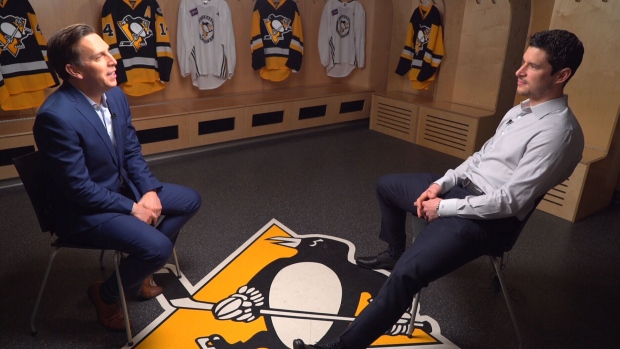 With 15 years playing for the Pittsburgh Penguins under his belt, he takes the time to talk about his Golden Goal, competing against Connor McDavid and the future of hockey with TSN’s James Duthie.

Crosby was drafted by the Pens first overall in 2005, but he says sometimes it feels like yesterday.

“I mean that moment I think is so vivid in your mind of getting drafted to the NHL, but so much has happened since then – just your mindset and all the experiences,” he says.

A million things could fly through a rookie’s head in the minutes before being drafted; but Crosby was thinking about the team he rooted for as a kid.

“I remember growing up I was a big Montreal fan, and I think they ended up getting picked fifth, so I’m like, ‘whoa, that was so close, that would have been great,’” says Crosby. “But then when it got down to those two teams, I was happy with either place.”

It only got better from there. You probably remember where you were when Crosby scored the winning “Golden Goal” for Team Canada at the 2010 Olympics in Vancouver.

“To win a gold medal in Canada, being a hockey player in that setting – being a part of a game like that – it doesn’t get any better than that,” he says.

Crosby is hopeful he will get a shot to participate in another Olympics, possibly the Beijing Winter Games in 2022.

“It’s an awesome opportunity to showcase hockey to the world. I’ve had two unbelievable experiences in the Olympics, and I think it’ll happen but we’ll have to see,” Crosby says.

While many once referred to him as “The Next One,” a few players have since been honoured with the unofficial title. One such competitor is fellow Canadian product McDavid.

“I mean, he’s so dangerous. He’s a big guy, too, so you know, getting in front of him and finding ways to score, it’s tough to defend him,” Crosby says of the Edmonton Oilers centre.

There are other players who Crosby admires – they’re the next generation of young players who are attempting trick shots with the certainty and skills of the greats.

“I think they’re confident but they also have the ability – they have the skill to be able to do it. So I think skill is on display, it’s encouraged, all the way through.”

Watch our full-length interview with Sidney Crosby above.