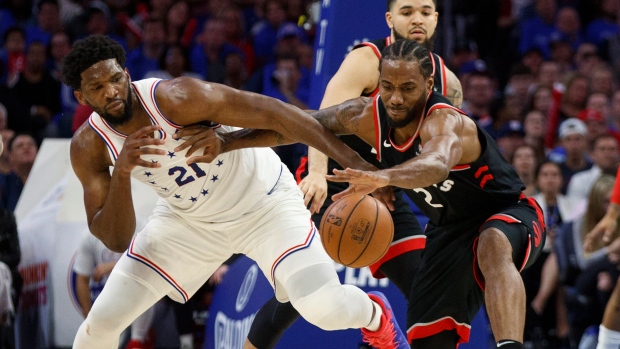 With the National Basketball Association on hold for the foreseeable future, TSN and Sportsnet are airing the entirety of the Toronto Raptors’ playoff run to the 2019 NBA title. You can watch Game 5 of the Eastern Conference semi-finals against the Philadelphia 76ers on Sunday night on Sportsnet at 8pm et.

From Kawhi Leonard calling the series against the Philadelphia 76ers, to the team improbably overturning a 2-0 series deficit against the Milwaukee Bucks, to that famous June night in Oakland when the Raptors got their hands on the Larry OB, you can relive all 24 games that made the Toronto Raptors NBA champions

After losing two consecutive games in the Eastern Conference semi-finals versus the Philadelphia 76ers and falling behind 2-1 in the series, Kawhi Leonard put up another brilliant performance in Game 4 to help the Toronto Raptors even the series.

Leonard was once again very efficient from the field in Game 4, scoring his game-high 39 points on 13-of-20 shooting. Included in his stellar display were five-of-seven made three-pointers — highlighted by the clutch one he hit with 1:01 remaining in regulation to help the Raptors secure a 101-96 win. In his typical do-it-all fashion, Leonard also had a game-high 14 rebounds and added five assists.

Game 4 marked the fourth consecutive time that Leonard has scored 30 or more points in the series.

"Just really growing up learning from great players, I was fortunate enough to be on some good teams early," Leonard said postgame in regards to his performance, "so I was able to see defences and go on deep playoff runs and I feel that helped me out today."

While Leonard certainly powered the Raptors to their series-tying win, the Raptors also got significant contributions from a plethora of other players. Marc Gasol (16), Kyle Lowry (14) and Danny Green (11) were among Toronto's other starters that scored in double figures, and Serge Ibaka also poured in 12 points off the bench.

"We needed some punch around the roster," Raptors coach Nick Nurse said. "It was a different mentality. Guys were looking to shoot, taking the first shot that was there."

The 76ers, on the other hand, really struggled away from Jimmy Butler, who scored a team-high 29 points. After leading Philadelphia to a win in Game 3 with 33 points, Joel Embiid, who battled a stomach illness ahead of Game 4, scored just 11. The team's other 2019 all-star, Ben Simmons, had 10 points. Shooting specialist JJ Redick was the 76ers second-leading scorer with 19 points.

"We got humbled," Butler said.

Toronto's win in Game 4 mirrored a pattern that they had established in the regular season, in that the team had only once lost three straight games during the 2018-19 campaign.

With the series shifting back to Toronto for Game 5, will the Raptors manage to go up 3-2 in the series? Find out Sunday night on Sportsnet.

Here's what TSN's basketball analysts had to say about Game 5.

“Game 5 had to have been the most complete game the Raptors have played all year. I mean, the beatdown was thorough. Kyle Lowry really set the tone. By his standards, this was just a pedestrian game from Kawhi Leonard, except for a nasty dunk on Embiid. Cue the airplane troll. I love a petty Toronto crowd.”

“What were the overused words uttered by all of us prior to Game 5? Pivotal. Crucial. Critical. Huh? This was Game 3 in reverse. Raps played their best game of the season and the Sixers just... sucked. 19,000 fans, including Drake, had their troll wings out for Joel and it was the Raps who took flight. Pascal - despite his calf contusion - was much better than Game 4 and KLow was as cool as the other side of the pillow. Kawhi didn't have his most productive game, but still did throw down a couple monstrous jams. Raptors barely broke a sweat. This unpredictable tussle now heads back to Philly. T.O. has the “Mo”, but the way this series has trended - who the hay knows? The Dead Sea Scrolls are easier to read.”

“Kawhi’s load management was given a different meaning as Toronto put together a balanced attack offensively. A huge second quarter and 16 3-pointers would prove to be too much for Philly to manage. Drake and Raptors fans would go on to troll showman Joel Embiid with his own airplane celebration as he checked out for the night.”

“Dominance! The Raps tore apart Philly in this one and the best part was they did it without needing an earth-shattering performance from Kawhi. Balanced scoring from the Raps, and a solid trolling of Joel Embiid. A complete team effort honestly made me believe this was over in 6, whoops.”

“Embiid was held under 14 PTS for the 2nd game in a row. He had 8 turnovers. As he checked out, with Toronto up big, Raptors fans mocked him with his own airplane celebration. I get that he was sick or injured or both, but if he wasn’t physically capable of backing up his Game 3 showboating, here's a wild suggestion: maybe don't showboat in the first place.”

“The Raptors pounded the Sixers! Kawhi had a double-double by half & got some rest, great contributions all around, and even a couple of playoff records were set: Raptors hit 16 3-pointers, and the 36-point win was the largest in franchise history. It’s back to Philly...where MAYBE there will be an Embiid sighting?”